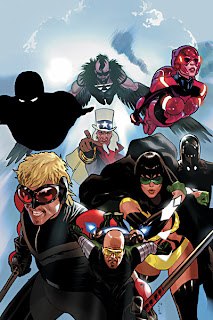 The other day I did an interview with Politico.com about Captain America. Of course, I was able to turn it into a conversation about Uncle Sam & The Freedom Fighters.

Just for the record, the final quote and the observation about Mr. Terrific....?

Comments:
For an article about Captain America there sure was an awful lot of DC talk in that interview. That made my day.

Uncle Sam and the Freedom Fighters is really your biggest seller? Or was that another error on the Politico's part?

Funny that Ex Machina, the best and I would think highest-profile (I guess I'm wrong) political book out these days, was not mentioned once. It might even be the most overtly "political" book - it's about an NYC mayor, for Crom's sake.

Also, Devon, I'm sure it's not your fault that you kind of come off kind of like a whining anti-Marvel (un)fanboy in that article (I'm not being sarcastic, I'm sure you sounded less pissy in context). I am no huge fan of Civil War, but I'm usually not exactly offended when a comic gets mainstream press and lots of people talking. And I know it wasn't your quote, but the article's placement of Mr. Big Planet's talk of turning potential new readers away from his store right after your complaint about CW's attention made the article read like y'all were saying, "don't bother - despite what you may have heard, you won't find anything of interest here."

It's also funny that everyone (in the mainstream at least) blames Civil War for Cap's death, when it was actually a long-building Red Skull/Dr. Faustus plot that was just conveniently executed in the CW aftermath to heighten both events' profiles (nothin' wrong with that).

US & The Freedom Fighters sold well but by no means was it our best-seller. It was, surprisingly, one of our better selling titles.

Gone are those halycon days when you had to ask permission to buy Spawn.

I know you think I'm anti-Marvel. I'm not. I'm just sick of the Marvel publicity machine that does nothing but gives us retailers nothing but the opportunity to sell a big event comic once, without giving new readers any kind of incentive to come back.

These things are designed to do nothing but make Marvel look good short term.

Whereas something like Freedom Fighters is, IMO, better contextually and will have lasting ramifications.

Context might not win DC any new readers but it's certainly easier to read and understand.

I knew you'd think I was saying that about you, so I tried to clarify twice: I was talking about how you sounded to me in the article. I know you're not really like that man, give me some credit.

Marvel annoys me too, a lot fo the time. Granted, I kinda liked Black Cap...who led to badass Patriot in the long run, so that panned out...and conditionally Bru's Dead Cap story as well (I've learned to trust in all things Bru, unless he's writing about mutants).

What I was honestly annoyed most at in the article was no plugs (not just from you) for Ex Machina. What's the deal? [<- may be rhetorical]

Don't you know what my favorite comics are these days? Ex Machina, Y, Fables, American Virgin, 100 Bullets (well, trades). Pretty much all my favorites are Vertigo/Wildstorm, except that darn Kirkman's Ant-Man and Invincible (oh, Berserk too - Japan via Dark Horse). Don't come at me like I'm startin some marvel zombie shnikeys in here, my man. I know better than to bring that into your house :)

Also, I only read about the first issue of Freedom Fighters, and didn't like it much. Not saying it's bad (I'm sure it's better than most of the Civil War books), but well...I prefer Ex Machina, heh

I didn't think that at all. I was just giving the people some context as to the eternal struggle that is our friendship.

You'd have an easier time holding yourself.

I was disappointed in the reporter who missed the point. She clung to the BP guy with "dorky comic book readers have little interest in politics!" rather than listening to Devon who was saying "comic book readers are interested in political messages that are well written!"