"Have you read all of your comics?" asked Scip.

"You're a character in the DC Universe. Take a look at page four."

I leap over the Oscar winner and smooth away the previous day's $100 bills cluttering this week's comics and there it is... 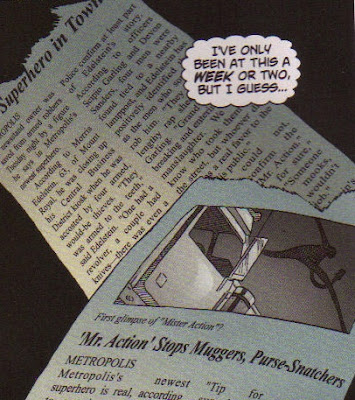 Thank you, Kurt Busiek, you magnificent man for bringing the inevitable Brave and The Bold Devon/Lady Cop team-up issue just that much closer to reality.

Comments:
That is awesome! Congrats to both you and Scip!

I am totally expecting the two of you to start thwarting crimes wherever you see them from here on out.

I smell spin off!

Are you gonna help the good old MPD out a bit?

(word verification: "jgggqlvi" which is the sound effect muggers make when taken down by the Sanders/Garling duo)

Congrats! I told you you were my favorite character on the podcast... I guess I'm not the only one who thought so!

You realize this means John Ostrander can kill you, right?

True.
He killed Morrison after all.
No-one is safe.

That is the COOLEST THING EVER.
Love & respect, officers.

[sigh] I'm still trying to get into an issue of Jonah Hex, even on a wanted poster. But, ya know, Hendrickson, just isn't a bad-ass sounding name

Unless you're a Blackhawk

Or your first name is Lance.