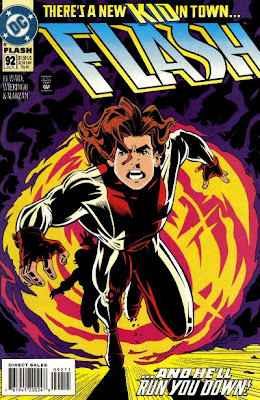 Let's start with a cliche'.

"If you want to make God laugh, tell him your plans."

I always hated that one for reasons, secular and non.

The point of this post is a simple one. Plans were made by DC Comics to kill a creation. A creation that, in my opinion, re-ushered in a sense of wonder to the DCU that had long gone missing.

June, 1994, we all who stuck around, were treated to The DCU through the wide eyes of a child and in that, I became a fan of The Flash mythos and more inportantly, a fan of Mike Wieringo.

I absolutely loved Bart's unique brand of wide-eyed optimism and sweetness. From what little I know of the man, he fully embodied his own creation.

Let me say this outright, I'm not calling for any sort of petition to undo whatever grand plan DC has in killing Bart Allen but in a universe that's all about legacy, I just think it's an absolute shame that this man's greatest contribution to it has been laid silent.

It would simply be nice to look at things through wide eyes again.

Comments:
Amen Sir...Bart needs to come back...he needed to in any case...but with 'Ringo's death...it would be the noble thing for DC to do

I still think The Legion from JLA has Bart in the future, trapped in their lightning rod. Since he's from that general time period, anywho.

Why would the Legion hold that inane lightning rod ceremony when they could have just picked him up or stopped the Rogues from killing him?

Killing him off was unfortunate, but the real damage was done several years ago when DC decided that there wasn't any place for Young Justice or Impulse, and what readers really wanted were "serious" teen superheroes. Which is just stupid on numerous levels.

Frankly, there are times (especially post-Identity Crisis) where I wonder if people at DC even like their characters.

I couldn't agree more, and I must say that I'm in awe of the heartfelt and well articulated things you've posted about Wieringo. Who knows if they will bring Bart back, but I think that it would be a good way to honor a great creator. Even if they don't listen, it's a great suggestion.

I agree, dammit. I need my Bart Allen fix, and now. Having to hunt down old issues of Impulse isn't cutting it anymore.

Assuming they got Barry Allen stuck in that lightning rod on the last page, then why couldn't they just go back to 1985 and grab him before he evaporated? Time travel, they could just go wherever and pick up whoever, it don't make much sense.