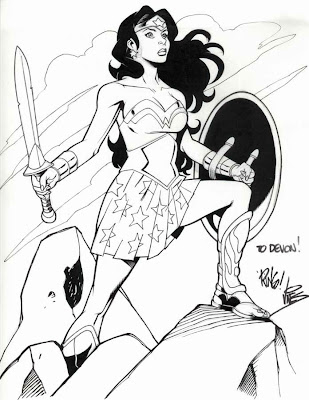 Have you ever gotten your ass kicked so badly that you couldn't believe ass-kickings of the like even existed?

One of the purest, most creative artists of this or any generation, my absolute favorite artist, Mike Wieringo, passed away.

You have no idea how much this saddens me.

Mike Wieringo, in the few times I met him, was always kind to me with his time and abilities. One of my absolute joys in comics fandom was the day I walked up to him, sketchbook in hand, and asked him to draw a sketch of Lady Cop.

After hours of sketching Spider-Man, The Thing and other world renowned comics luminaries, the look of absolute befuddlement on this man's face as I showed him 1st Issue Special #4 will stay with me to the end of my days.

Mike's work was an absolute joy to behold. There he was, in the midst of the grim 'n gritties, doing what he does best: characters unafraid to curl their mouths into a smile. Whether it was Robin, The Flash, Rogue, Spider-Man, Tellos or his most lasting contribution to the comics medium, Bart Allen (Impulse), one could feel the absolute joy this man took in sharing his abilities.

I have had the pleasure of meeting him and thanking him for his contributions to the medium and each time, he would put his hand out and shake my own.

It was my absolute honor to have had the the opportunity to have met him and to simply be given the chance to have done so.

The medium and we all are just that much richer for having you, Mike.

May God bless and keep you.

What a terrible thing to have happened.

It did indeed sadden me to read of Mike's passing. One look at his artwork and I would always feel a little happier than I was the moment before.

He will be missed.

Wow. I, too, never met 'Ringo, but his work on The Flash was certainly a draw during those years. I was so happy when he took over the chores of Adventures of Superman as Ed McGuinness has a similar style. It really made the Superman titles pop off the page and visually remind you of all the wonders that are the four color pages.

I think his Spider-Ham cover during "The Others" storyline is one of the best pieces of comic art ever. It has all of the fun and excitement of comics in one beautiful image.

'Ringo has been one of my very favorite artists since I first got into comics. His work has always been the liveliest, most good-natured and just plain fun work you could ever find on the stands. But even more impressive than his (these days sadly contrary to the norm) approach to superhero and fantasy artwork was his pure and nearly unmatched skill in pulling the most convincing and effective expression out of as few lines as possible. I had thought it was a shame these past few years that we weren't seeing enough from him (first he gets replaced on FNSM, and then only gets the FF/Spidey miniseries to work on).

And now this...it was always a plan of mine to meet Mike at a con (or anywhere), get a sketch or 10 from him and hopefully have a chat. From all of the work he's done, the stuff he's said, and the great things people always say about him, I was sure he would be the nicest person I could meet from the comics world. Knowing that this will now never happen, that I'll never see anymore Spider-Man or Tellos from him...just knowing that such a bright presence in an increasingly pessimistic industry is gone hit me like a brick wall when I first read the headline concerning his death this morning.

And to think I had been planning for years to finally read all his Impulse work for the first time. Doing so after this, I can only hope that the fun that Mike always infuses in his work will outshine the sadness that I'll feel as I constantly think to myself that we'll never be lucky enough to see anymore from the man.

It's awful, just awful. I never got to meet him, but thanks to his blog, I feel like I had.

I've been re-reading his FF issues since the news broke, and as great as they are, his passing is making it hard to enjoy them properly.

But I -am- enjoying them, which speaks volumes about his gift.