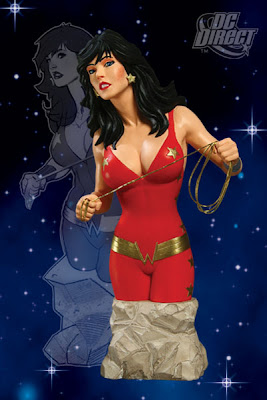 2. Between this and DC's pulling the trigger early on Parallax in the pages of Countdown, do the editors ever like, you know... talk to one another?

4. Can we keep her in the red leotard and hooker boots, please? (Wonder Woman Annual #1)

5. Is it me or does everything that American Apparel makes look like something Donna Troy once wore?

6. Was I the only one surprised at how much I enjoyed The Umbrella Academy #1?

8. Can we we all agree that if there's ever a Mr. Terrific series that Keith Giffen should be the first choice as writer? (52: The Four Horsemen #2)

9. You know when the sh*t's hit the fan? When Batman's cracking the jokes.

11. Is there anything more "gloriously rotten" than Showcase Presents: Batman and The Outsiders, Vol. 1?

12. If you haven't done so already, find the Doctor Thirteen: Architecture & Mortality trade paperback. It will complete you.

13. A cross between The Martian Manhunter's costume and Sailor Moon's, if there's a costume more designed for "cute" than Miss Martian's, will you please let me know?

15. Has Blue Beetle surpassed Batman as having the best supporting cast in comics?

Needless to say that was one of my favorite comic moments so far.

Any guesses on where is the most embarrassing locale he will find one of his fellow Asgardians? My money's on Sif, a pole and some mirrors behind her.

I previewed Umbrella Academy a couple months back and thought the exact same thing. So no, you aren't alone.

And while we're talking about DC continuity gaffs, how about the major differences between Countdown and Wedding Special on how the villains attack?

That's actually easy: this takes place just after the bachelor party (i.e. a few weeks before the wedding).

After blasting through the first two trades in a week, I'm inclined to agree with you about Blue Beetle. Fantastic book, and a lot of that is due to the supporting cast, which is excellent. 60s Spider-Man excellent, in fact. How often do you see that anymore?

Has a third trade been solicited yet?

Not yet but I'm guessing one should be on the way soon.

11: I'm digging in even as we speak (I'm pulling a Blockade Boy on it)... I think "gloriously rotten" certainly describes it!

12. It has indeed completed me. I didn't know who I was until I read this. Did anyone else leave it open on the last page for an inordiante amount of time?

The 60s Spider-Man is a good comparison for Blue Beetle, except one thing - Jaime isn't nearly the whiner that Peter was. He's befuddled about the scarab and the suit, but even when he's in trouble he doesn't sit around and cry about how terrible it is to be a superhero with amazing powers. Peter did it every issue, until page 17.

I've said this before, but to my Marvel-hatin' eyes Blue Beetle more closely resembles Buffy than it does Spider-Man. Of course, the whole Buffy dynamic wouldn't exist without the influence of Marvel, so I'm willing to call it a draw.

That said, BB definitely has the best supporting cast in a comic that isn't referred to as Season 8.

7. Yes. You are the only person warming up to it.

I thought Speedball was the Spider-Man of the eighties. High school student protagonist, powers acquired in a lab accident, authority figures convinced the hero is a villain...

I think no one is ever going to warm to All-Star Batman and Robin. You either like the series, like it because you know why Frank Miller is writing it this way and you find it funny, or you don't like it. I haven't seen anything in any of the issues that would make someone jump from one camp to another