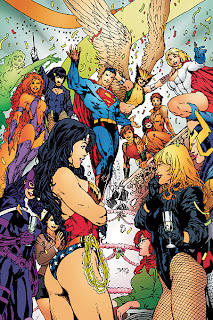 ...and another one comes to a close.

I've said it once and I've said it before. Baltimore Comic-Con is the best comics convention out there.

The best thing about BCC?

You don't have to try not and hang your head in avoidance of "Wrestling Superstar Virgil" or leap past Lou Ferrigno in order to get to the long boxes.

What did I see?

What did I learn?

I got a sneak peek at The JLA Wedding Special.

If there were any doubt, The Justice League is returned to greatness in writer Dwayne McDuffie's very capable hands.

Trust me, you'll want to pick this one up.

Cully Hamner, when not drawing and in between singing to editors, has still not become Black.

He was in great spirits and drew an incredible, incredible Wonder Woman for me. I'll show it to you all soon.

He also had on display the first issue and a half of the upcoming Black Lightning: Year One mini-series.

It is beautiful and for continuity pornographers, several panels feature a young baby I can only assume is his daughter, Thunder (of Outsiders fame.)

Howard Chaykin is the ti*s, I'll tell you what. We reminisced on misspent youth and Blackhawk. If anyone can tell a dirty story like this man, I haven't met him. Chaykin's the man. He's living proof that it's all in the delivery.

Caught the Mike Wieringo Tribute panel. It was very touching listening to their wonderful remembrances of the man who history will probably count amongst the legends of the comics field.

Bob McLoed (Action Comics) was there, as well. He did a drawing of Lady Cop for me and I am not ashamed to say this: my legs buckled a bit upon receipt. The man is a true artist's artist.

Talked to Mike Hawthorne, late of Queen & Country and currently of Vertigo's Un-Men ongoing series. A nicer guy you'll never meet. He also told me he has the first 5 or six issues drawn and in the can. As if I needed more reason to admire the guy.

Franchesco of Savage She-Dragon and Green Lantern Quarterly fame was there at his first BCC. He's one hell of a nice guy and I was glad to hear he's already wanting to come back next year.

Exactly what this character needed. Solid writing and art. I think this'll be what Nightwing needs in order for readers to return. For the past two years this character's been in nothing but a holding pattern, what with a truly sh*tty Bruce Jones story-arc where he becomes a male model while Jason Todd takes his name and kills people in some crazy attempt to do something or other.

Did I mention the female Nightwing?

Marv Wolfman's work on the title, I heard, hasn't been bad. Just enough there to make me care.

Hopefully, this team'll help us all remember that this is a character second only to Batman in cunning and history.

At the DC Nation panel, someone asked if we'll see a new Hawkman series in the near future. DiDio looked like he wanted to burst. That's a good thing.

All in all, I had an great time. Conventions like this do nothing but make me appreciate the hard work and devotion these creators put into their work. That energizes me and helps me enjoy the medium all the more. That's what it's all about, after all.*

Comments:
The irony here is that now, thanks to you, I keep thinking that Cully Hamner is black. You've confused me thoroughly. Damn you.

I find it amazing that Virgil, one of many jokes within the wrestling industry, has transcended that and become a meme.