Sketch-A-Palooza begins and to start it of with a bang, let's start it off with one hell of a bangin' lady: 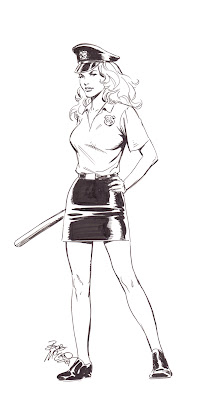 That look in her eye? Confident, vigilant, regal. That, friends, is The Eye Of The Tiger.

McLeod perfectly captured the majesty that is Lady Cop, hand firmly on hip, baton in hand, lowered just so, raised just high enough to signal she'll knock your ass out.

Me, I'd sell 'em the comics and smile pretty and let more women be dazzled by my wit and how handsome I am in proper lighting.

Liza Warner is bangin in that sketch. I'd let her cuff me.

Some day a terrible terrible accident may happen Devon, and that sketch book will be mine!

Pay no attention to the piano hanging from the pulley above the door of BMC. It's just taking me a few weeks to move it.

She can give me a parking ticket any time, if you know what I mean, wink wink, nudge nudge say no more?

This is a perfect example of how to draw an attractive female comic character which doesn't rely on showcasing her cleavage or having her in a thong. It's an attractive drawing w/o being embarrassing to look at.

Well, in a perfect world, it wouldn't be called "Lady Cop" because that is kind of sexist. We don't say "Gentleman Cop" or "Man Cop." This series could just be called "Cop."

I just wanted to belatedly say that this sketch, and the link to Bob McLeod's Web site, prompted me to request my very own McLeod sketch which he says he might be able to start sometime in November.

So with any luck, by the end of this year or early in the next, I will own my very own Bob McLeod drawing of Maxima. (Don't judge me.)

I have a fascination with a fictional character with a vast knowledge of venereal diseases.

Who am I to judge?

Congrats on the sketch!

Or maybe I was having oxymoronic fun with you.

As I post this, it's Saturday, April 12 -- the day after the official return of this blog. I've been waiting for official supervision before I started posting comments again.

I'm posting here for the benefit of anyone who might be strolling through the Seven Hells archives in the future who finds himself or herself wondering, "How did that Maxima sketch turn out?" or "Should I know who Maxima is?"

You can see the art here, at Bob McLeod's site. Eventually, I need to get a copy of the picture hosted under my own domain -- maybe I can even write a post explaining why I like Maxima so much (although "hot redhead with bare midriff" is at least 86 percent of it.)

I haven't had the original framed yet -- a man's short-term and long-term priorities change when he's sitting at a stoplight and his truck gets hit by a car that was itself hit with enough force to kill a 10-year-old girl. But I wanted to share my prized possession and my longtime crush on Maxima with all of you -- you in the future.

First, my heart goes out to that little girl and her family. I just can't even imagine.

Secondly, I'm glad you made it through OK, Brian.

That McLoed guy does some beautiful work. Just has a classic way of doing things. The older I get the more I appreciate guys like him and Paul Ryan. Just guys who when they draw an arm, you never have to guess at what they put down on the page.

I'm proud to have played a small role in expanding your crush on Maxima.