Look! I Was On A Podcast! 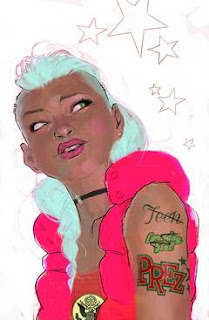 For your listening consideration:

And in the second half of the podcast, we talk about what we love and would absolutely change about the mainstream comics industry.


Learn why I hate Superman!

OK, not Superman but his current direction and much more!

I do not like the current direction of Superman at all; we haven't seen what I consider the "real" Superman in the nu52, and come to think of it I'm wondering how often we've seen him since the Bronze Age. As I've said, there are three things that make a good Superman story: he cares about absolutely everyone, he inspires people to be their best, he uses his powers creatively. Do all three things in a competently-told story and it will be well-received.

You could do an entire Superman series for decades where the first panel is always the same: Superman flies down in front of a crying child and asks what's wrong. Take the story in whatever direction you like. ... Holy hell, I just realized this was a formula they used to use in "Due South", to great effect.

I get your points about the supporting cast and the setting, but the heart of the problem with Superman right now is Superman. That, in turn, probably has to do with editors who don't have a feel for him; can we get, say, Dan Jurgens to edit the Superman titles? He gets what makes Superman tick; let him set the direction and perform quality control.

About Green Lantern, there was nobody who wanted to see Hal's return more than I did, and yet by the end of Geoff Johns's reign I was begging for the comic to end. I dropped all the GL titles some months ago, and ironically only started picking up Hal's book again now that Hal is the only GL left. It's finally an interesting story because it's not a mega-crossover; it feels like Hal again.

I think you're right about the conundrum between new takes on characters and making sure they're on-model, but at present, the big problem with Superman (and Wonder Woman) (and the GLC) is that they've completely forgotten what the model should look like. Make sure your editors understand what on-model looks like*, and let them hire writers who vary from the model sensibly. Like I was mentioning Hal up above; no he's not patrolling sector 2814 with his ring, but he is laying down the law according to his best understanding of justice and respect for life, and that's how I like my Hal.


*: I realize this is a subjective matter, so if we need to apply an objective standard, consider the Dini/Timm cartoons the definition of "on model". I don't think they got everyone perfect to be honest -- their John Stewart was too much the soldier and not enough the architect -- but they got so much more right than wrong.

How I would have fixed the story, with word balloons and maybe redrawing two panels: a last minute reveal that Superman used his heat vision, or something, to reprogram the teleporters to beam all six million paradise inhabitants to a fertile uninhabited world. There they could work together and start over, and make heaven or hell for each other, whichever was their preference. Now tell me that wouldn't an incredibly on-model ending: Superman saves EVERYONE, keeps the bad guys from hurting everyone else, and gives them a fair chance to become better people. He even uses his powers creatively.

Tell me you wouldn't enjoy an ending like that, I dare you.

Was just saying how I can't believe Geoff Johns is the same guy who wrote the comics that preached goodness and interconnectivty. All of his work is full of mopey, phyrric victories and it kills me that good guys just can't be that.

I'm hoping comics get back to a place where they actually celebrate goodness.