Kyle To The Corps 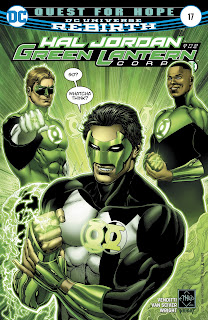 After nearly a decade of downgrading, Kyle Rayner looks to be back where he belongs: in a crab mask and in The Green Lantern Corps and I cannot tell you how happy this makes me.

Yes, Kyle, initially, sucked at being a Lantern but that's because he was us.

He was us as a Green Lantern.

He wasn't meant for the ring but accepted the responsibility behind it. All the while doing so with no Corps or Guardians of The Universe to guide him.

He was us. He was the ultimate witness. He was meant to help us see The DC Universe with new and fresh eyes. He did the things we would do if we had good hearts and zero experience. He was doing the best with the tools he possessed. Kyle Rayner had impostor syndrome and I suspect many of us felt empathy.

Along with Wally West, Tim Drake, Dick Grayson, Conner Hawke and others, he made the DC Universe feel new again. It felt young again.

And with the return of Hal Jordan he was diminished. He was set aside and made other (Ion) in an attempt to make Hal Jordan THE Green Lantern.

He was diminished again and again and cast further and further away from the thing that defined him best until finally, his death seemed almost humane. If it weren't for Kyle holding the line by himself, there would be nothing for a Hal to come back to. More than any other, Kyle deserves the ring.

And now, he is back. Weird mask and stupid gauntlets and smiling in the green. It may not last but it's good to have him back.