Batman: Locking Fools Up and Walking Away For Thirty Years 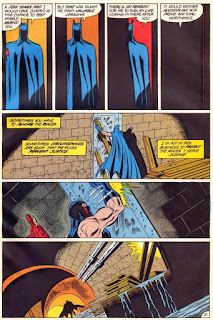 A pivotal scene from Batman: Ten Nights of The Beast saga circa 1988. It wrecked my brain that Batman simply just walked away. He'd done everything he needed to do and just... walked. Just left  the antagonist, KGBeast (seriously) locked away. No food. No water. Well, none that we knew of anyway. When asked by Commissioner Gordon if he saw him, Batman just sort went, "Uh. Nah." For very teen aged Devon, seeing Batman go full-Marvel on a dude, kinda messed me up a bit.

A few issues later, DC Comics editorial pushed writer Jim Starlin to add in a throwaway line that explained away Batman's actions. It went sorta like, "Yeah, I called the police and they sent a guy to check on him. He was gone, though. Eh. Shit happens."

I dug this story so much that I wrote freaking FAN-FIC. Yes, in 1988, I wrote fan-fic where Batman doubled down on his effs to give and continued on to fight Orca, The Whalewoman. The KGBeast continued on, eating the occasional rat and sucking up whatever sewer water he could. One night, a maintenance worker, wondering why that door had been sealed up, fell into the plot device hell I made for him, unleashing The KGBeast back into the Gotham streets and into a story only a teenaged Devon could tell titled, "Return of The KGBeast."

Yeah. I named it that. By the way, I am still available to write this.

So, imagine my surprise when I see this month's Doomsday Clock #3... 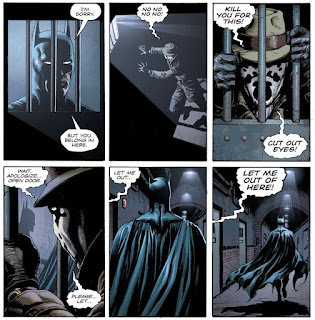 My fan-fic probably wouldn't piss as many people off, though.

Comments:
God I used to love Starlin's writing, up through about 1987. Up to that point he was giving us Adam Warlocks and Mar-vells (he didn't create either character but he redefined them). Thanoses, and Vanth Dreadstars.

Then, something happened. Starlin started writing Batman out of character. Starlin decided to wreck John Stewart by redefining him as "the Green Lantern who screwed up". "Infinity Gauntlet" was pretty good, but "Infinity War" and "Infinity Crusade" felt just redundant, like fanfiction about his favorite characters. I lost track of Starlin for a while, but next time he appeared on my radar, he was killing off the New Gods.

There's a fine line between giving a character a new direction, and just wrecking the character. I feel like Starlin is more about wrecking these days, and I could do without that.

Great point about Starlin's tendencies to want to break the toys so that no one else can play with them.

Let's not forget that he once killed Hawkman as well.

I'm more convinced than ever that his Infinity Gauntlet was more a fluke bullseye with him repeating the story of how he hit it.