The End of The Wildcat Strike 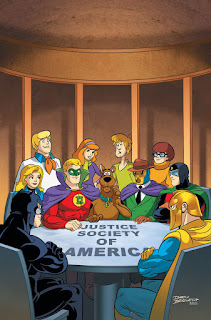 One of the greatest injustices of The New 52 is that it altogether erased the Justice Society of America from continuity.

Sure, we got a comics thing that was called Earth 2 out of it but in my very, very, VERY humble opinion, eff that comic.

One, because eff it and two, because it had ZERO Wildcat in it. None. Therefore, it was terrible.

Since 2011's cancellation of The DC Universe continuity, to my knowledge, there have been ZERO appearances of Ted Grant, Wildcat's gov't name, within the pages of a DC Comic, in-continuity or otherwise.

So, imagine my surprise while looking through the June 2018 DC Comics solicitations and lo AND behold, Scooby-Doo Team-Up, of all things is where we see a Wildcat of any sort, reappear on the comics page.

If you're not reading Scooby-Doo Team-Up, you should. It is simply a celebration of all things fun, Scooby, comics and Warner Bros properties. In short, it's good comics.

Now, I know this story won't be in any way, be a precursor of anything within DC Comics proper but seeing as how we've had no Wildcat sightings in seven years, I'll gladly take this.