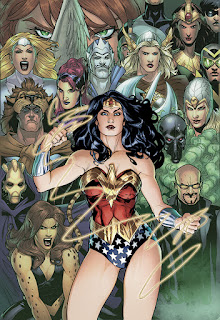 Comments:
See, this is why I follow this blog: the quality-to-post ratio is still absolutely unrivaled.

On the larger topic of rogues galleries, I was thinking about why it's hard to come up with one for, say, Green Arrow. It occurred to me that there are two main classes of galleries:

- Villains who don't stand a chance against the hero, like with Superman or the Flash. The villains are more nuisances to the hero, but they keep his life interesting.

- Villains who are much more powerful than the hero, like many of Batman's enemies. The heroes can still prevail if they are multifaceted enough, like how Batman can bring cunning to bear against Killer Croc.

That's why it's so hard to come up with a rogues gallery for, say, Green Arrow: he's low-tier enough that every potential foe is of at least his power level, but even with trick arrows he can't punch up like Batman. There's just no room for a rogue's gallery. If anything, Green Arrow would be easiest to position as a nuisance villain to a more powerful hero.

Which leads to the idea of hero / villain rivalries where the conflict is more philosophical than physical, as an alternative to good physical match-ups. Green Arrow would probably make for a great match against the Kingpin, where Wilson Fisk has to publicly praise this Robin Hood Of The Poor while hiring crews of apparently ordinary muggers to try to stop him. The real battle is on the "meta" level.

And that gets us to the closest thing I can think of as a rogues gallery for Wonder Woman: embodiments of abstractions. Ares as a God Of War could probably be made to work, where he is not just a capering villain but rather an embodiment of mankind's violent tendencies. As for other foes who represent other philosophical concepts (indifference, shyness, lack of education), well, I'll leave that to better creators, but the risk is that it may not always be easy to know what to say about villains who are ultimately one-note morality play extras. So even going the philosophical route, it's difficult to give Wonder Woman a rogues gallery.

YOu complete your all wishes here. Choose your girl according to your need.
punjabi bagh Escorts
dwarka Escorts Service
Escorts in east of kailash
Call Girls in connaught place
Call Girls in munirka

Escort of Delhi ISHA GARG is not available at your doorsteps to fulfill your fantasies. just visit the link below and say hi to her
Delhi Escorts Ishagarg