I'm experiencing Joker fatigue.
Recently, I was on Twitter and a user whose initials I'll use, "DB" proposed that "There needs to be absolutely no Joker or Joker related stories from DC for at least five years." I read that sentence and felt my heart rise a bit. My heart yearns for a DCU without a Joker in it.
I like that world, I want to be in that world. A world where a Joker appearance may actually... mean something. 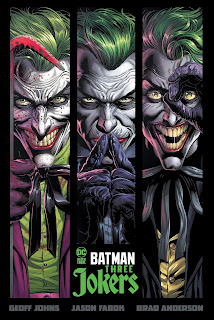 Let me get this out of the way... I don't hate The Joker. I like him. I am tired of him, though.
Lately, I find myself more tired of the things people put on him and into him. The Joker is plainly and simply, insane. That's it. There's nothing more to it than that. As I grow older, I find myself less interested in what new way he'll inflict his cruelty onto Gotham. I become less interested in which way he'll escape again to do all over again but in some new crueler way.
I'm tired.
I'm tired of folks thinking there's brilliance to be found in insanity.
The original fun in The Joker was to be found in his randomness. How he could pop up in one writer's story wanting to destroy The Justice League, only to wind up in the suburbs fleeing Big Barda and Mister Miracle's cookout. Want another cool Joker story?
My personal favorite Joker story from the pages of Batman: Legends of The Dark Knight where Batman finds The Joker close to death after crossing paths with Ra's al Ghul, must make a hard decision allow him to die or submerge in within the restorative ooze that is a Lazarus Pit so that he can bring The Joker to justice.
Batman chooses the pit. Now, here's the thing about Lazarus Pits, when one rises from the pool, they emerge violently. Feral, even.
The Joker having lived most of his life immersed in violence, emerges from The Lazarus Pit changed, racked with guilt and pain over all of the lives he's destroyed, crying for the judgement he finally knew he deserved.
To say that I was intrigued would be an understatement. That story took place twenty years ago in Batman: Legends of The Dark Knight #142-145. I haven't been given the opportunity to be surprised by The Joker since.
Lately though, stories involving The Joker don't lean into the randomness of his actions and go all in on the belief that his sadism is somehow a frequency we could never understand.
To quote Chris Rock, "Whatever happened to crazy?"
Lately, all The Joker is is just evil and nothing more than a Batman-adjacent serial killer.
Let's be real, today's Joker is less criminal mastermind and more Victor Zsasz but in purple pants.
In order to get into most any Batman story, you have to invest into that rogue's mission. With say, The Mad Hatter, you most likely will have something "hat" happen. When the "mad" is emphasized something glorious could unfold. For proof, look no further than Detective Comics #787, Brian K. Vaughan's heart-wrenching look into the Mad Hatter's mind. It moved me and now, I have a hard time watching Batman sock him in the jaw again.
I find myself in an age of mass shootings and gaslighting from all sides less able to stomach the continuing saga of a serial killer.
This month, there's a new continuing Joker series arriving on comic shop stands. I genuinely believe the creators involved are great and will find something new to say with this character.
Maybe I'll be missing out but I don't see myself reading it. As a firm believer in consequences, my head just won't allow me to go there.

Comments:
"I'm tired of folks thinking there's brilliance to be found in insanity."

Amen to that. At the risk of sounding elitist, I see so many mediocre people trying to transcend mediocrity via contrarian stances that are completely divorced from the human condition. "Is the Joker actually more sane than anyone?" "Is Batman a fascist?" "Is Lex Luthor right about Superman?" Good God, some people are too dumb to understand comic books, a medium where, I stress, people in unitards regularly hit each other with telephone poles.

As for the Joker, yeah, he's great in the way a pepperoni and black olive pizza is: a delight, but gets to be a chore if that's the only thing on your menu.

I was explaining the appeal of the Joker to Queen King Beauregard's kid the other night; he only knows him from "The Suicide Squad" and "The Dark Knight". Of the two he much prefers Heath Ledger; Jared Leto is just a violent tough guy and not all that interesting. And even then, Heath Ledger's Joker, as good as he is, isn't really "classic" Joker; for the most consistent portrayal I'd have to go BTAS, where the Joker can be anything from benignly jocular to murderously cruel. You just don't know what you're going to get with him.

Even the fact that there is no thematic connection between bats and jokers is part of it: the Joker doesn't fit into anyone else's scheme.

I agree completely.
But comics aren't selling what they used to, and a Joker movie made a billion dollars, so it's IP to be exploited. For better or worse (and the more it's exploited, it's only to be much worse).
Once a character has been overused, overexposed to the degree that the Joker has (a character that thrives on vaguerie) is it even possible to pack the mystique back in the bottle?


I’m entirely with you and so happy to see your comment here. The intent was to express a disappointment that villain comics are just as, if not more popular than superhero comics at DC. It just makes me sad that The Joker currently sits in this place of death rather than mayhem.

I want to see (or hear!?!) a missive from you about the overall state of DC comics today. Comics for me have been such a stress point. My long time retailer is an anti-masker and fell down the conspiracy well, so I moved on, but my new retailer ran into flow issues and Diamond put their shipments on hold three months ago, so I've been without new books since April. I feel so detached from comics. I certainly am having a hard time summoning the love and obsession I held for them for over 3 decades.

I think it’s time for me to do a new “State of DC” post. It’s been a while. Sorry your retailer went full-on ass. Can’t be easy to sever a relationship that benefitted you on several levels.

I’m with you on a lack of enthusiasm for comics. It’s been so long since I’ve felt energized from a comic. Almost apathetic, honestly. That should never be.

I think it’s time for me to do a new “State of DC” post. It’s been a while. Sorry your retailer went full-on ass. Can’t be easy to sever a relationship that benefitted you on several levels.

I’m with you on a lack of enthusiasm for comics. It’s been so long since I’ve felt energized from a comic. Almost apathetic, honestly. That should never be.