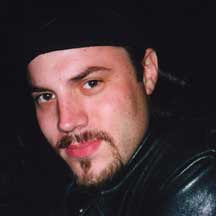 Geoff Johns
Originally uploaded by Devon Sanders.
According to Newsarama, Geoff Johns is leaving The Flash with issue 225. This kinda saddens me. The Flash was the book where I "discovered" him. Not only can the man can write a hell of a comic but in my random interactions with him, he came across as one hell of a nice guy.

I guess it was four years ago, I posted on The DC Comics Message Boards a message complimenting him on uses of characters of color. We forget that this is the man who installed a Black hero, Mr. Terrific, as chairman of DC Comics' greatest super-team, The JSA. Not because of any racial quota but because he was, simply, the best man for the job. He also, in the pages of The Flash, brought Cyborg back to prominence, eventually making him leader of The Teen Titans.

Among other things, he re-added The Black Panther and The Falcon to The Avengers roster during his run on the title, re-imagined DC's first superhero, The Crimson Avenger as a Black Woman and even introduced a Latino cop into The Flash mythos and the best thing about it?

These things just happened. With NO huge sermons on diversity. He, simply, did it while helping to reshape The DCU into the wonderful universe it is today.

Oh, and that post? He replied to it within five minutes of my posting and just nice as can be. A class act. I wish him nothing but good fortune in all future endeavors.

I know this is off-topic, but ... Fellow Rannies -- help is on the way! Today on Dial B for BLOG, you'll find two special "RANN VICTORY BANNERS." Download these banners and declare yourself! Victory to RANN!

Dial B for BLOG

THAT'S COMPLETELY OFF TOPIC; KNOCK IT OFF.