Number Seven Of The Seven Deadly Signs Of Villainy! 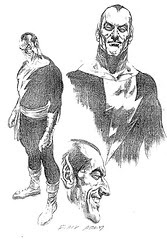 What one dominating physical trait do these villains most foul have in common?

Yes, POINTED EARS are the seventh and last of The Seven Deadly Signs Of Villainy!

Three of the five villains I mentioned are aliens from outer space. They're supposed to look that way so that look..well, alien, thus evil. Eclipso is supposed to be the darkness in men's soul. He owns that POINTED EARS sh*t!

Now, as if Black Adam putting "Black" in his name wasn't EVIL enough for him. I mean, he's practically begging some dumbass to call him a name just so he can kick his ass but good!

No, Black Adam rocks POINTED EARS of his own free will! He CHOOSES to look like he'll stab your babies with his ears!

There's a beauty in that ugliness...

and that concludes the Seven Deadly Signs Of Villainy! I'm sure you all can think of more and you know what...I encourage you to. I know I left many out so feel free to post the ones you think I missed.