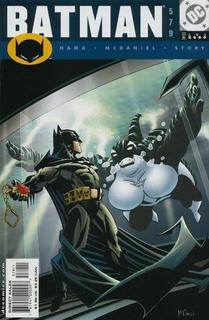 Pack up the cats, yo! It's ORCA, THE WHALE-WOMAN!

Who the f**k let her in?!?! Go somewhere and deliver me a candygram!

Oddly enough, someone thought a frickin' WHALEWOMAN was what Batman's Rogues Gallery was missing. Can you imagine the conversation?

"Wait a minute...where's our Whalewoman to fill out this classic ensemble?"

Judging by the look on Batman's face, he can hardly wait to bash Orca in the head with his mother's ruby necklace.

This Frankenstein's Monster did exactly what any good monster does: it destroyed its' creator.

Rumors abound that her creator, former Wolverine and G.I. Joe scribe, Larry Hama was relieved of his Batman writing duties due to overwhelmingly negative fan reaction. Oh, that wacky Internet!

Any character that forces a man to lose his mind and not only create but wear this Hasbro-esque monstrosity... 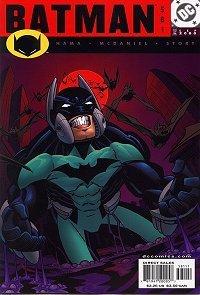 ...needs to be immediately shipped off to Marvel.

I hear The Sub-Mariner's single again.

Comments:
Before she goes -- and good riddance -- she HAS to hook up with Penguin somehow. And yes, I mean that literally.

I mean, penguins are a staple of the killer whale diet...

It's just too perfect, thematically.

A profoundly disturbing image, sure, but you can't deny the thematic resonance.

Surely some writer has put them together, right?

I understand and like the idea of ejecting characters that don't fit in one universe to one where they would be more at home, but...
Now, with this one in particular, you're just throwing out the trash. Does trash fit better at Marvel? Don't both companies have a bunch of crappy villains? Or are you just wishing DC's biggest jokes on Marvel 'cause you wouldn't care if Marvel were to end up full of crappy characters?

If this whale hotty actually fits better in Marvel for a certain thematic reason (obviously she doesn't fit in Batman's rogues gallery, but in DC?), it'd be nice to let us know what that is rather than just point out how much she sucks (which she obviously does). That's what makes this exercise interesting.

Andrew, Marvel's rogues gallery favor animal-based monster-hybrids. Part of the reason for that is Marvel was publishing mostly monster and horror comics before it turned slowly to superheroes.

In DC there are animal-named villians (the Penguin, Catman, Killer Moth, the Catwoman, et al.), but the animal connection is light and mostly thematic.

Marvel, however, is home to a host of villains who are either part animal or whose weapon is specifically designed to give them the powers of their zoonic counterparts (Spiderman, the Vulture, the Scorpion, Dr. Octopus, the Lizard, et al.).

Thus, Whalewoman fits better in the Marvelverse than in the DCU.

Devon is SO steeped in both universes that that is very obvious to HIM, and probably didn't think it needed to be elaborated on.

Personally, I'd want to give her a try in Aquaman's rogues gallery first before letting her go.

who else is there for readers who love Big Beautiful Women?

Yeah, that's the reason I was thinking too, but Devon's post just seemed to come off as more of a Marvel-bash to someone (err...me) who actually favors Spider-Men to Supermen.

I also thought she could probably find a place in Aquaman's seas or elsewhere in the DCU. Maybe Marvel already has too many animal-themers and DC could stand to hold onto one of their crazier ones? At least she's more unique at DC. Even thinking about her at Marvel has me thinking they already have a character who is exactly the same...I should look into that, actually.

Anyways, thanks for caring :)

Now I wonder if Devon'll delete me again?