BoP-ed In The Head (Updated) 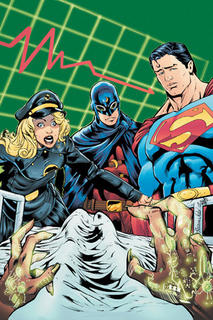 I can't say which surprised me more. The fact that after two one-shots, two mini-series, a really bad TV series and some 85 monthly issues, I'm reading and loving Birds of Prey or issue 85's ending.

Birds of Prey has pretty consistently been one of my favorite comics, especially since the addition of Gail Simone as series writer. In my store, the numbers on the book have climbed progressively upwards and that's a wonder in today's marketplace. Especially great is the book's ability to have done so without having the characters resort to getting their ya-yas out in an effort to sell it.

I love that this book has made me consider Black Canary as something other than Green Arrow's girlfriend or a "default" Wonder Woman. I love that this book has done more for the character of Barbara (Oracle) Gordon than a million adventures as her former persona, Batgirl, ever could have. Oracle has become a seriously vital player in The DC Universe, using her wits and intelligence in ways she would have never considered while Batgirl. She's done so while managing a disability.

The last page of Birds of Prey #85 could be the beginning of something many fans have been asking for but not this one. I think it may be a disservice to the character of "Oracle." Before John Ostrander brilliantly capitalized on Barbara's genius intellect in the pages of Suicide Squad, I wondered what would become of the character after having her spinal cord blown to pieces in "Batman: The Killing Joke." I wondereded no more as Ostrander into DC's information broker, Oracle. She went on, arguably, to become even more powerful than Batman. In most worlds, information is king. In The DCU, it's "queen." As Oracle, she did something I never could have imagined for her as Batgirl. She joined The Justice League.

All done, masterfully, from a wheelchair.

I have mixed emotions about Birds of Prey #85. I want to love the last page. I don't. I do. I dunno. The DCU is a place of miracles but just this once, I'd like to see reality play out within a comic book.

Comments:
I don't think this counts as a spoiler, since I haven't read a single issue of BoP. It's only speculation when I guess that you must be talking about Babs getting use of her legs back. If that's what's happening, I agree with you: I hope it's a temp thing used to examine the character.

But you know, it would make sense to happen. After all, she lives in a world with people who are half human/half machine, people who gained amazing powers from hundreds of different chemicals or elements, and people who have the ability to bring the dead back to life. In such a world, why the heck is someone with her superhero connections stuck in a wheelchair, anyway?

I've always said the same thing about Professor Xavier--if Henry Pym can build Ultron and Tony Stark can make the Iron Man armor...why can't either of them make a decent pair of cybernetic leg braces?

I guess that's the dilemma of medicine in the superhero world: "You will believe a man can fly, but you also must believe that another can't walk!"

Great site by the way. Dunno if I've ever commented before, but I've been lurking for a while.

Thanks, Bill. I love getting comments. Thanks for reading and doing so.

Personally, I trust Simone to follow through with the plotpoint & give Babs all the appropriate pathos if it's a permanent change...

Praise Odin on your blog, by the way. You have plans for SPX?

It's just 6 Metro subway stops from where I live. I'll definitely be there. If you're going, let me know, we'll hang out.

Comes a time when it's no longer a "stunt," it's a character attribute. If enough creators buy into a change in a character, it sticks. I'd argue that Barbara Gordon is at this point now. It'd be mighty hard for her to go back to being Batgirl (and it'd be a step down for her besides).