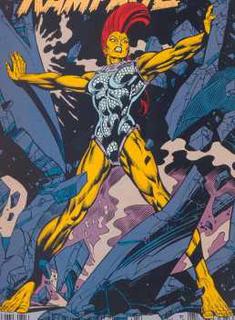 There are few things that I'm sure of. I do not always know what day it is. There is one thing I am sure of: nicknaming your child "Kitty" either (a.) Pre-destines them to a life of stripping...or (b.) In The DC Universe, science.

Karen Lou "Kitty" Faulkner participated in a Daily Planet sponsored science competition, exhibiting her findings in solar energy. Anyone who's ever read a Spider-Man comic knows you want to be NO WHERE NEAR a science exhibition while actively participating in a comic book. Nothing good comes of it.

"Kitty" was caught in an explosion turning her into RAMPAGE, a golden, solar energy powered SHE-HULK with superhuman strength, endurance and speed.

Much like a certain female jade Marvel character, she becomes stronger the dumber she gets. Some brilliant writer decided the only way to control this problem was to put a collar on her.

Where's Ol' Doc Wertham when ya need him?

Rampage's first appearance was in Superman #7, July '87. She was created by a one John Byrne, who two years prior to his work on Superman was the writer/artist on Marvel's Fantastic Four comic. A comic where he replaced founding member, The Thing with...you guessed it...She-Hulk.

Sometimes, a man misses his woman.

Unlike She-Hulk, Rampage has never quite seemed to master her powers or her appearance. Rampage sports the haircut of choice amongst DC's dubious. The "Mohawk." Ask New Wave, Magpie and Atom-Smasher where a "Mohawk" will get ya.

I choose to suffer Rampage, no more. I choose, instead to focus on the possibility of bringing the beautiful She-Hulk over to The DCU. What universe couldn't use a green-eyed, super-powered, fun-loving, long-legged lawyer? Can you imagine the fun she and Power Girl could have? Can you imagine a story where She-Hulk tries to keep a certain "The Superman/Big Barda Sex Tape" off the market? I can. DC needs her. 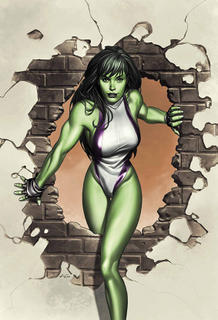 Marvel, we need her.

Comments:
No you don't. You'd just have Booster Gold shoot her in the head during the next big event to prove that the line is still "gritty." Best to leave the funny characters to Marvel where they have a chance to survive.

Whatever! Marvel practically invented the gun! BTW, say "hello" to Hawkeye for me.

Uh oh, your obsessions are showing. What a man won't do to justify his predilection towards multi-hued babes. We all know why you want Big Green in the DCU... But do you have any idea how it must make Rampage feel to know that, once again, she’s second best? Damn all you men and your ‘green means go’ mentalities! Oops—Sorry, fell off my chair giggling.

Hawkeye, Shmawkeye. Marvel just tosses everyone through a big revolving door of death; current DC is specifically targeting anyone who used to be fun for termination. Run for your life, Plastic Man!

She-Hulk was one of my favorites when John Byrne was writer/artist on the title. Dan Slott's doing better than anyone since Byrne but nothing compares to the original. And JB also created Rampage, who might have been an homage to a 70s-era story where Lois Hulks out and fights Superman.

Okay, once again, I know I missed the boat on this one, but a She Hulk/Power Girl Crossover LS would be better than actual sex!!!