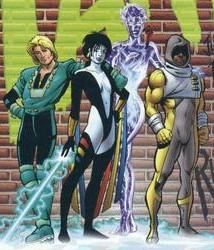 “Seven Hells!” would like to nominate THE TEEN TITANS for donation to Marvel.

Scip of “The Absorbascon” fame’s new religion is the hate he heaps upon a Mr. Marv Wolfman. He hates all things Wolfman. He refers to “Starfire” as "the turd.” I hate him for that. She’s one of my fictional “baby’s mamas.” A man should never attack another man’s fictional “baby’s mama.” I will not give Scip the satisfaction of sending my beloved Titans over to Marvel.

I will send over Dan Jurgens’ though. How could you not?

Five Earth women were chosen for experimentation by the evil alien empire, The H’San Natall, creating five half alien/half human superheroes no one will give a dang about.

RISK: A MUTANT with super-strength, speed and stamina.

PRYSM: Controls light. (So does anyone flicking a light switch, hon.)

FRINGE: He has powers and his parents threw him off a bridge.

ARGENT: Generates silver plasma. (Baby, give up crimefighting. Crap in a bucket and make yourself rich.)

Separate, they’re outcasts, fighting nemeses like…Dark Nemisis, together they fight one another, bickering and crying, angst-ing on one another’s shoulder as X-Men often do.

Sorry, I couldn’t help myself.

Together, they suck the wind out of sails.

Together, they AREN’T The Teen Titans!

Obscure nouns having something vague to do with my power? Check!

I do NOT call Starfire 'the Turd', Devon!

I call her the FLYING Turd, and that's based on her Heroclix sculpt.

No, It's actually just to have fun within my two favorite hobbies: writing and comics.

The same project could be done from a Marvel perspective. Last time I checked anyone could come on Blooger and create their own blog. You should try it. I think your reading experience just may become a bit broader once you write something other than questions you don't really want answers for. Do or don't. I have little patience for rhetoric.

I may not be too keen on Marvel these days but leaving that on their doorstep is a little rude....

But, given scipio's description of her, maybe you should put Starfire in a paperbag and set it on fire before you ring the doorbell and run!

I don't know how I know this. Jurgens somehow brought Joto back to life in last issue of his Teen Titans run.

BTW, Scip will pay...dearly for offending my house.