A Message To All Songwriters... 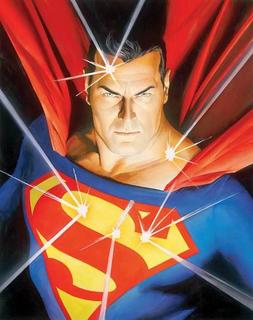 Yes, Superman is an ideal but It does not impress me that you reference "Superman," at all. It only goes to show little you know about life, literature and pop culture. Five For Fighting, Dave Matthews, anyone considering using Superman's name...just stop.

No more sweetly croonin' tunes in a desperate attempt to get groupies to see your "sensitivity." Don't give middle-aged men anymore soft rock songs to dedicate to their wives after they've cheated on them with thier mistresses. No more soundtracks for fratboy heartbreak. Leave Superman out of it. Superman's THE ideal. If you want to live up to the ideal, be clever. Reference the ideal, not the name. Leave a subtle message. Y'know, being kinder to your fellows instead of whiny to the masses. Do something positive with the "Superman" name...

or would that be too un-Superman?

Comments:
Oh, but I like "Sunshine Superman." I can't help myself. That one even namechecks Green Lantern!

The song that really ticks me off, though, is "Pocketful of Kryptonite," which completely misrepresents Jimmy Olsen.

I would hope The Flaming Lips have some sort of exemption.

Actually that song is called "Jimmy Olsen's Blues". The name of the album it's on is "Pocket Full of Kryptonite".

(Spin Doctors were maybe my favorite band for a while...blush...)

"(Spin Doctors were maybe my favorite band for a while...blush...)"

The Spin Doctors were everyone's favorite band for a while, Franny. Don't feel bad. It was 1993. We didn't know any better. Besides, Pocketful of Kryptonite was a decent album. It was everything that came after that sucked.

Oh, by the way, Devon, can we at least keep that REM song? I like that one.

Y'know, I kind of like that one, too. We'll make an exception for that and Redman's "Superman Lover," as well.

And "Resignation Superman" by Big Head Todd and the Monsters.

Never heard that one. I'll have to look it up.

I'm forced to second this sentiment of Devon's. In looking for superhero related songs for SuperHero Radio, I was ticked off to find that most songs that mention Superman aren't about him in the least. Just whining suburbanites trying to elevate their inferiority complexes:
"Oh, my girlfriend thinks that I'm Clark Kent,
but there's a Superman inside my head,
and she sneers because I owe back rent,
just like Superman, I wish was dead."

"Superman Inside" by Eric Clapton, on the "Reptile" album. Good gritty rock song.

"I Want to Fly like Superman"-a classic by the Kinks. Surely this one gets a pass.