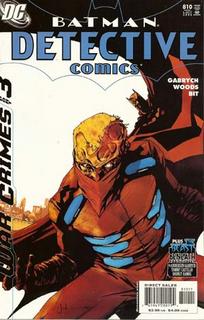 Geez, man! When's Keith Giffen's DC work gonna catch a break?! After reading Detective Comics #810, you have to wonder if DC is playing "Scorched Earth" when it comes to Giffen.

In the space one year, numerous characters he helped gain prominence within The DCU have been killed off.

Heck, even Mr. Miracle's former sidekick, Shiloh Norman is getting in on the act replacing Scott Free as Mr. Miracle in the SEVEN SOLDIERS: MR. MIRACLE mini-series.

After having four of "your" characters killed within a year's time, what more could happen?

In 2000's Suicide Squad #1, Giffen killed off an All-New Suicide Squad, one comprised of former villains, The Cluemaster, Big Sir, Major Disaster, Multi-Man and Clock King. Villains, who in the pages of "Justice League" Giffen decided to have go "legit" following years of getting their butts handed to them by the superhero set. So, what better way to prove your good intent than by petitioning to join The Justice League. It didn't go so well. They were soon assigned to The JLA's Antarctica branch. Before they showed up, there wasn't an Antarctica branch.

Well, somehow the government got to them and "KABLOOEY!" Five dead villains.

Comments:
Is THAT how the Cluemaster died? I didn't remember that.

Imagine what he and the Riddler could do together...

Well, hell, if the Cluemaster thing bugs you, have you checked out Batman #644 yet?

It doesn't bug me at all. It's just another story to me.

Well, to be fair, Captain Atom gets "killed" every other week. Giffen himself almost killed him with Mary Marvel in the "FKATJL" miniseries.

Naturally, Nate appeared alive and well (and bald) in Superman/Batman recently, and is off to an adventure in the Wildstorm universe, wearing that Priscilla: Queen of the Desert-inspired costume that Alex Ross designed in Kingdom Come.

They'll all be back after the next Editor decides to reboot the DCU.

And isn't that Captain Atom costume just the original Charlton Comics appearance one?

Captain Atom's a good character but I'm not wild about that new/old outfit.

As for Giffen's characters getting killed off, heck, I guess purges happen in every universe from time to time. And if the Charlton universe is restored as an imprint (or just an offshoot Earth altogether), Blue Beetle and Captain Atom will be back.
Shame about Rocket Red, though.

What no sadness over the loss of Maxwell Lord? Greatess con artist villian ever. The DCU will not be the same without him.

I thought the original Charlton costume was blue, with red legs and silver arms, and a human-looking head, something multicolored like that.

The Kingdom Come/new miniseries costume is gold with a big red atom orbital logo pattern on his whole body.