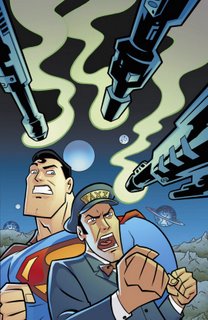 JUSTICE LEAGUE UNLIMITED #18
Written by Adam Beechen
Art and cover by Ethen Beavers
In the deep reaches of outer space, Superman lies injured
and powerless on a remote planet under a red sun. And the
only one who can save the Man of Steel is…Space Cabby?

He is an Absorbascon sympathizer.

Assist me to the couch; I think I have a humor-hernia!

Never seen me and Adam together, have you...?

There ain't no justice.

Actually, I kinda like that all these third-, fourth- and fifth-string characters are popping up again. They aren't ALL getting killed off, and knowing they're there makes the DCU a better place.

I look forward to February, and the glimpse into the Wonderful World of Odd it shall bring.

(Oh, and the RTW:IC Special. I love how Ivan Reis draws Kyle Rayner)

If Space Cabbie is killed off, I will hunger strike-cum-burn myself, Tibetan Monk-style, outside the DC offices. No blood for Crisis!

Aw, c'mon, no love for Space Cabby? For my money, Beechen's the only guy who has carte blanche to use every last bit of the DCU-- and he's having fun doing it. PLUS he used the Question! How cool is that?
And... Sue Dibny's not dead in the JLUniverse, as far as I know.

And... Sue Dibny's not dead in the JLUniverse, as far as I know.

I done told you: Space Cabbie is the quintessential DC character: odd, somewhat stupid when you think about it too long (> 1 second) yet gloriously goofy at the same time so you have to like it.