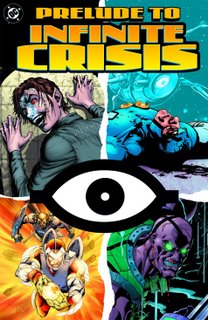 Let me tell you whippersnappers a story.

When I was a kid, we had to trek seven miles in the snow to get our comic books from the drug store.

Not some cutsie little comics boutique like the one I break my neck to run but a drugstore, dammit. That's right. In order to buy comics, I had to fight off syphilitic disco dancers and tuberculosis tykes to get that elusive issue of Millenium #1 or any of the connecting DC Universe crossovers.

Back in those halcyon days, a boy wanted every single crappy thing associated with a crossover. As bad as they were, I wanted every issue so that I could feel connected to every corner of The DC Universe. If Lana Lang was gonna be a Manhunter, dammit, I wanted to be the first on the block to know that Millenium was crap!

I don't see this type of behavior much. Don't get me wrong, with Infinite Crisis having arrived, people still do come and buy many of its' crossover issues. All Of "Infinite Crisis" JLA issues have had repeated sell-outs at my store but the others...

Gotham Central's doing OK. Superman, as well but titles like Outsiders and Firestorm aren't exactly setting the town on fire. Why is this? Is it because after nearly two years of living with Identity Crisis, Counntdown To Infinite Crisis, The OMAC Project, The Rann/Thanagar War, Day Of Vengeance and Villains United, we just may be a bit burned out. Are we holding back because of the way the internet has changed our reading habits. I mean, we don't have to actually buy the comics to know what's going on anymore, do we? The fellas on the internet will tell you every word of what they've just read. Are we "waiting for the trade" in a post-Millenium landscape?

I don't know anymore. What do you think?

Comments:
I think it's probably a combination of two things. One, as you suggest, is that you can find out what's going on without necessarily having to read the books. But the other is that, if you've been reading comics for any length of time, you've probably been "burned" by the "big crossover tie-in that really isn't." Dating back to the first Crisis, really - "Man, what a gyp - this is supposed to be a Crisis crossover, and all we got was two panels of Captain Carrot wondering why the sky is red."

I haven't a clue what's going on in Firestorm, and indeed only have a vague notion of who/what Firestorm *is* at this point, but figure I'll probably hear about it somewhere if it's worth reading.

Ah, the drugstore. Spinning the metal rack...thumbing through each jumbled tier trying to find what you were looking for. Can't say that I miss it.

As for me, the internet has completely changed my buying habits. Thanks to DC's website, I now know what the storyline is in every comic and how many issues the arc is going to last. With the exception of JSA, I don't buy any title regularly. I pick and choose among all of DC's titles looking for interesting story arcs. It has allowed me to read titles I never would have picked up before on my limited budget. It's very liberating. I treat each story arc like its own little mini-series.

As for the whole crossover thing, yeah, the message boards and DC's Crisis Counceling (thank you, DC!) has made it unnecessary to pick up every related title.

Yeah, I've had no trouble following IC so far, even though I read almost none of the tie-ins, and have only read a handful of DC books in my lifetime (ironically, the first DC book I ever read was an issue of Blue Devil that tied into the original Crisis!). I've not even been reading spoilers, either.

Which means that (a) not much of importance has been going on in the tie-ins, (b) they're doing a goof job of welcoming new readers with the main book, or (c) I'm really smart.

I'm betting on (a), especially based on how IC#2 made reading the first four issues of JSA Classified utterly unnecessary.

Back in the day, I could never count on getting two successive issues of any title. Now, I buy a load of comics... and enjoy "the hunt" far less.
I feel kind of burned out on "this is going to change comics FOREVER!!" hype. Not sure if I'll be reading comics (as much or at all) a year from now, but... who knows? I've dropped out before and come back.

59.90!?! That is a steal of a deal, here in Canada, our freakish money means that we get to spend upwards of 75 bucks or more to keep up with that stuff, and like the slave to storytelling I am I will shell out the dough, but dang it I am going to complain loud and long!!!

Spinning the metal rack at the drugstore, thumbing through each jumbled tier -- thanks for the memories, Captain Infinity. I had forgotten how much fun it was to thumb through a bunch of random comics, never know what you'll find.

The alphabetical, orderly arrangement of new books at my comic book store is far more efficient, but not nearly as fun.