The Memetic Force Of A Hammer 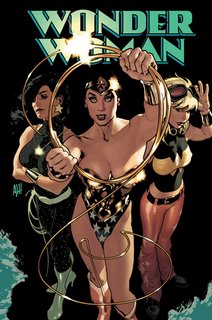 Everyone loves Adam Hughes. You will not believe the extents people will go to get a sketch from this man. I have seen one of my customers lined up at a convention six hours or more before a convention opens to get a sketch from him. Internet groups swoon at the announcement of a con appearance, plans formulate months in advance in hopes of securing the coveted Hughes sketch. Once procured, they instantly are posted with tales to rival The Odyssey. Once one's posted, they're everywhere. A Hughes sketch has become the comics art collector's version of a meme.

Hughes' beautiful images graced the covers of Wonder Woman for, correct me if I'm wrong, six years. Often, the stories inside stank on ice while I kept buying. Why?

Strictly for the covers.

...and DC hasn't quite realized this. Why there's no collected version of this man's DC Comics covers is totally beyond me. From Justice League International to Legionnaires to Wonder Woman to Rose & Thorn to his current work on Catwoman, his work has always been exceptional. Exceptional to the point where I would gladly plop down whatever amount of money DC Comics needed in order to presnt his work his work on glossy paper with running commentary from Hughes on each cover's composition.

I'm not asking for much. Just what I want.

Comments:
I spent 40 bucks on the DC Encyclopedia only to have dozens of entries go out of date once all the Crisis-related titles began.

I'd definitely pay for a book of Hughes covers...and boobs never go out of style.

Cute the way the lasso kinda loops around WW's groin area, in an unnatural fashion, as if to say, "LOOK HERE! CROTCH!".

Perhaps once Wizard get these Michael Turner "art"books out of their system, they'll put out ones featuring good artists, like Bolland and Hughes.