This Is Gonna Leave A Mark. (Updated) 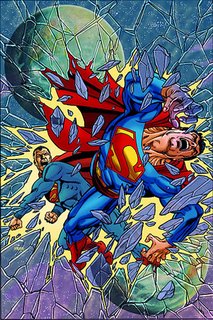 This cover of Infinite Crisis #5 is, no pun intended, one of the most striking I've ever seen.

It works on so many levels. Level One, symbolism. It's just overflowing with it, explaining for the uninitiated, the significance of Infinite Crisis #1. As a kid, I remember sitting in art classes, drawing characters who, when they fought, knocked over many a building while doing so. I should also mention that all I ever read were Marvel Comics. It wasn't until I became a devout DC Comics convert with The Crisis On Infinite Earths that I realized that when DC characters fought, worlds shatter.

The Superman at the end of Infinite Crisis #1 is pre-Crisis Superman. The Superman of cartoons and thousands of comics who changes the course of mighty rivers with his bare hands. I call this one "Earthmoving Superman." This is the guy who'd when Earth was threaten, he'd simply ignore physics and move The Earth to a safer place so he could fight the aliens in peace. One punch from this guy and Richter scales became irrelevant. The Green Lantern Corps breaks out "Superman Protocols."

On this cover, post-Crisis Superman is taking on a man who's realized he hasn't lived up to his potential. This Superman was a has-been before he ever was. For nearly twenty years, he's been plagued by the demons of self-doubt. As we can see, truth hurts. The denizens of The DC Universe will hurt, as well. The Superman we've been living with for twenty years isn't the man for the job of saving a world. He is not a leader. This man lets Batman dictate how The Justice League should be run. Pre-Crisis Superman would never have allowed for that.

This cover tells a story. I want to know what's behind it, its' symbolism. Will our Superman see a return to greatness? Will he rise to the call for action.

Let's hope so. From this cover image, we can tell there's a lot at stake.

Y'know, I think that's pretty much the heart of this story. It's not about fixing what went wrong, or ignoring everything that's happened...it's about evolution. And the catalyst for that evolution? Making the heroes be HEROES.

I mean, THAT'S the story. We don't want some other-dimensional superman, no matter HOW good his intentions, to win. He's not OUR superman. He doesn't even have the E in his name! No, what we need is for our superman to get up and move. To finally have something against which he has to push back with more than his muscles. He's gotta use the great stuff that makes him a hero in the first place (hidden answer: not his powers).

To pick a big nit:

Golden Age Superman has never fought Brainiac or most of what we recognize as the classic rogue's gallery. He's mostly fought assorted mad scientists, street hoods, and nazis. He's never had the Fortress of Solitude, Kandor, Supergirl, Superboy, etc. (in other words, all the stuff Byrne got rid of Post-Crisis and was hated for precisely because those elements were considered "essential"). The Pre-Crisis Superman everyone evokes is the Silver Age/Bronze Age Superman, the one the old geeks grew up with and instilled that "sense of wonder" in them. If you grew up with this guy you'd be reading floppies in a nursing home right now.

As Scipio has pointed out, he's killed quite a lot - and not evil Kryptonians either, but ordinary humans - and didn't seem to mind much, which makes him a great big flaming hypocrite in his current context.

In a sense, even though I'm not buying this series, it's doing its job for me, because I totally want this nasty, genocidal, shrivelled old goat to get his clock cleaned, which means I'm really rooting for "our" Superman for the first time in ages.

Iron Lungfish beat me to the post. Seven Hells! isn't the only one guilty of mixing up Earth-2 (Golden Age) Superman with Earth-1 (Silver Age) Superman lately. Earth-2 Superman had to leap, not fly, over tall buildings when he was introduced. Earth-1 Superman is the one who could move planets.

This man lets Batman dictate how The Justice League should be run. Pre-Crisis Superman would never have allowed for that.

Amen, Devon. If nothing else comes out of this I want to see the Kansas farmboy tell Batman how things are going to be done from now on. To quote Jerry Seinfeld, "He's Superman for crying out loud!"

So back in the UK

And so thinking that Batman should be telling aliens how they should behave. Didn;t realise that the world was run by Batman-hater Johns.

The problem is, both views might be sorta right or wrong, because AFAIK, DC never really nailed down what the differences between the Earth-1 and Earth-2 Superman were.

Clearly, Earth-2 Superman *started* less powerful, but he developed over time. But the open question is just how far he developed, because there was never a clearly established dividing line between "Earth-2" stories and "Earth-1" stories.

I think based on evidence from the comics, 1938-1985, a writer could justify *either* making Earth-2 Superman just as strong as Earth-1's, moving planets around, etc. But you could also justify making him about the same as "modern" Superman in power level, or even a tad lower.

Okay, sorry to sidetrack the high-school type "my superman can beat up your superman" dicussion, but there's something much more important to discuss.

The teaser trailer for the new Superman movie is out. That's a link to the fullscreen version.

"This man lets Batman dictate how The Justice League should be run. Pre-Crisis Superman would never have allowed for that."

Seems pretty clear to me that this "Original Superman" is the conflation of the Earth 1 and 2 Superman. The Silver Age Superman used to be the backstory of the Earth 1 (Bronze Age) Superman.

But the Silver Age is NOT the backstory of our current Superman.

This guy can fly. This guy had a fortress (yes, he mentions it in IC2).

This is not "the Golden Age" Superman or "the Silver Age Superman". This is a generalized Pre-Crisis Superman, folks.

I'm just waiting for the Timothy Daly-voiced animated Superman to zoom in and beat them both up.

Plus, his Lois Lane has great miniskirts. Whoo hoo!

I'm with Scip on this. "Old" Superman is a hybrid of the original, not-too-powerful/kill-the-badguys Superman from 1938 and the much stronger, more heroic Superman of that amorphous pre-Crisis era (though I don't think he represents all of Silver Age Superman's wildest feats).

The set-up suggests that "new" Superman will end up having to defeat "old" Superman, justifying himself and rediscovering his inner hero at the same time. What this will mean for the bigger picture, I have no idea.

This Precrisis superman is like the sentimental feature our generation portrays the World War II generation. They're heroic, stronger, and more moral. Our modern age superman is the coldwar/post cold war gray area morality. He is the superman of a generation that has not had a massive war on the level of world war II. its a world of grays vs absolutist vision and while modern society has those who believe in absolute visions, they aren't nearly as consistent as the percieved world war II type.

This man lets Batman dictate how The Justice League should be run. Pre-Crisis Superman would never have allowed for that.
True, but stand for it or not, if it were Morrison's Batman, Old-Superman would still get bitch-slapped until he learned his place. :)

Scipio, Infinite Crisis #2 makes it explicit that "Old Superman" is the Superman from Earth-2. He says he's from Earth-2, he describes Earth-2, he summarizes Crisis and how he ended up in the weird glowy dimension with Alexander Luthor et al after beating the Anti-Monitor. So he's Earth-2 Superman, not generalized "Pre-Crisis Superman," becase there was a second Superman Pre-Crisis - Earth-1 Supes, who went into the mixer to become modern Superman.

It's entirely possible that "Continuity Cop" Geoff Johns has just forgotten that Earth-2 Superman had no fortress, etc. It certainly wouldn't be the first thing he's screwed up continuity-wise.