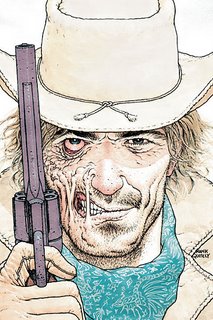 I'm back and buzzin', cousin, reviewing for CHUD: Thor's Comic Column. What sort of comic could pull me out of semi-retirement?

Why that comic would be Jonah Hex #1. Wanna read the first paragraph? Well, her it is:

Comments:
I picked up this issue solely on the strength of your review. I am very glad I did, although I don't know how healthy my bank account will be if I keep buying books you recommend...

I thank you for the kind words.