Waaay Out Of Your League 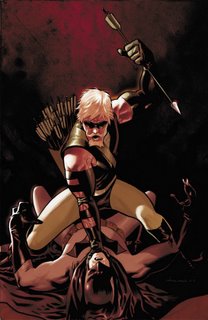 Lot of news in this Newsarama article but the thing that struck me the most was this:

JLA is ending with its' 125th issue. Any takers on it becoming more like the animated Justice League Unlimited series upon its' return?

Comments:
I think that might be a safe bet. Feature the "heavy hitters" of the DCU but leave it, Mission: Impossible-style, so that just about any and every character can walk into a story.

Alternately, the new JLA might be a decentralized umbrella-organization for various partnerships and pair-ups, sort of a "hero network" assembling groups to handle whatever crisis arises.

I say restore the original numbering. That would put it at #387 for the new series, giving one full year to build up to a big #400...

Y'know, I hope not. I hope that DC can still have its premier team. JLU would be a Marvel Team Up for DC then. Brave and the Bold is there for that. The JLA is an opportunity for the core superheroes of the DC universe to interact with each other.

I'm hoping the next incarnation has the Wonder Twins, Zan and Jayna, and their space monkey, Gleek.

Perhaps they'll relaunch it with a #500 written by Bendis, then relaunch it again three months later with a new #1, and a JLA comprised of a bunch of C-listers who spend all their time talking about nothing of significance. Then they'll spend four months introducing a thinly-disguised version of the Hulk to the team, only for him to not actually appear in any subsequent stories, before rounding out the first year with a "who is Renegade?" storyline in which it'll be obvious from the very start that "Renegade" is in fact Batman in disguise, but there'll be an implausible final twist in which it turns out to be Lady Shiva in a man-suit.