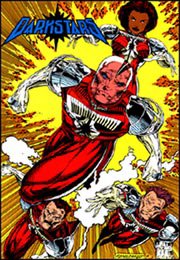 Unless they're going to be on uninhabited alien world, just as Galactus prepares to devour it, when they enter Marvel, no dice.

I am not going to foist Jean Grey off on you, just to get an even more convoluted character back in Donna Troy!

Ok, I gave it some thought. Donna Troy has to die, but I'll permit the others to live. I'm envisioning them more as bounty hunters though. I can't really think of any alien races in Marvel that would commission a group of space cops. Agreed?

I think all the Darkstars already bought it in Adam Strange: Planet Heist. But I could be wrong.

One thing I've never understood: why does the symbol of the head darkstar, the one with the pink skin, look like a piano?

The Darkstars are infact dead as of Planet Hiest.

Fire the corpses at The Nova Corps.