The Collective Works Of Superman 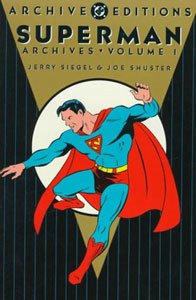 I just finished reading Superman Archives, Vol. 1 and I really, really enjoyed it. I never realized it before but Superman used to be like this crazy post New Deal, Socialist bastard. When the rich were making millions by exposing their workers to unsafe working conditions, there was Superman, not even bothering to get into costume, ready, willing and able to expose their dirty truths to the world. If he had to lure them down into a coalmine and to their deaths to prove that he meant business...

When orphans were being underfed and made to work long hours by a state sponsored orphanage, Clark Kent was there to expose its' injustices to the world. Superman was there to make sure it never happened again.

In one story, Superman even joins a foreign army in order to track down a crooked arms dealer, following him all the way to the battlelines. At the story's end, Supeman even coerces a cease-fire between the two warring factions by threatening to beat up the countries two leaders.

I like this Superman. Superman Archives Volume 1 was a true eye-opener, leading me to believe the Superman of old would actually side with Wonder Woman, not oppose her.

Comments:
Ever read the one where Superman gets ticked off that there are children living in a slum?

Removes the kids.
Obliterates the slum.

There, he says, now the government will have to build them decent housing!

My favorite moment in the collection is when, breaking into the enemy camp, Superman, in costume, simply announces he's a reporter. Way to keep up the secret identity, guy! (Warren Ellis just did the same thing, so it's not like it's just an old comics thing)

Check out the Stormwatch tpb, "Change or Die" for a modern look at 'what if 30s Superman came back'.

Yeah, the reason Clark Kent is a reporter is that it was a good job from which to crusade for social justice in the 30s, enabling him to fight for justice from both sides of his life.

Yeah, a couple of years ago, there was a story in Action or Superman where the Modern-Day Supes encountered someone who was in every important way his pugnacious predecessor.

Despite the intents of the writer to show how Supes had risen to become an icon of noble altruism from his scrappy roots, he just came out looking like a Tool, an emasculated, watered-down Defender of the Status Quo.

I managed to get all of the original Max Fleischer Superman cartoons from 1941 to 1942 on DVD from Wally World for $3 last year. It was intersting to see Superman fighting giant robots one second, then seeing him as a WWII propaganda the next.

Also, the sights of Superman destroying the Japanese fleet and Lois shooting at gangsters with a Tommy gun are pretty damn cool.

I just imagine Golden Age Clark Kent walking down the street and somebody sees a construction worker fall off a building.
"Hey, that looks like a job for Superman!" says some unwitting passerby.
"The hell it does," replies Clark. "Not high profile enough."

"The hell it does," replies Clark. "Not high profile enough."

Well, he'd rescue him, utterly unconcerned with blowing his secret identity if this required jumping up to catch the man in his civvies.

Then he'd launch an investigation into whether the construction company was providing proper safety gear, beat somebody up badly if it turned out they weren't (or better yet, dangle them from the same incomplete skyscraper), and publish a big expose in the next edition of the Daily Star.

Hmmm, maybe that's why I tend to think Clark on Smallville has the makings of a sucky Superman when he grows up, and if he ever does. He's got the idea of protecting people from external threats, but no sign that I can see of a social conscience beyond that.

I mean, he's got access to the Internet and other sources of world news, super hearing, and is capable of running cross country in minutes if not seconds. By now he should have felt compelled to zip over to Rwanda and try to do something there, or failing that, New Orleans to rescue people and rebuild the levees, even if he needed to do so too fast for anybody to see his face.