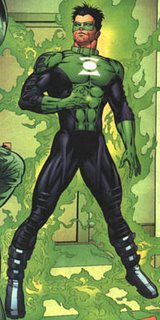 I don't like Shakira. Like Kyle, she discombobulates me with all of that unnecesssary gyration. She thinks she's sexy. She isn't.

Kyle Rayner owns a Shakira CD. Two, in fact. Fijacion Oral, Vol. 1 & Oral Fixation, Vol. 2. Shakira is part of the soundtrack that goes through Kyle Rayner's mind. He plays it all the time.

You wouldn't want Kyle Rayner for a roommate. Now, Bruce Wayne? Maybe. Quiet guy. Gone for most of the night and sleeps all day. Plus, if he did play any music, it might be Nat King Cole.

See? It all makes sense.

But Bruce Wayne? Can you imagine what he'd do to you if you drank the last of the orange juice then put the carton back in the fridge? Because I think a full body cast would be involved in the end result.

Now Clark Kent. Sure he's in and out all day, but he's too nice a guy to object to you playing loud music, or making out with your significant other on the couch when his parents come by to visit.

And now I've scared myself.

Anyway, I believe Wayne is more of a Billie Holiday guy.

I'd like Kyle as a roomate. Mainly because he'd be in space half the year.

I'd make him pay in advance before hand though.

That's ood, since I know Kyle's also a fan of Nine Inch Nails. Doesn't seem right that a person would like that AND Shakira. Like mixing oil and water....

And I don't care if he plays Latvian nasal chants. It'd be worth it to have him walking around naked in my apartment. That's how Jade got her paws on him after all.

Besides, I have heavy duty hearing protection from work. Who needs to hear him speak?

Devon, I'm sorry, I thought you were going to say Shakira, from the old Warlord comics wasn't sexy. And I was going to have to call you a liar. I have no problem with Shakira the pop star, except isn't she like four feet tall or something? Like travel-size, like a Mothra princess.
If nothing else, Kyle=better roommate than Hal. Hal's a test pilot, Hal's a toy salesman, Hal's on a mission to goddamn Mars, yet he still makes the time to steal your girlfriend.

Because he's Hal damn it!

Stealing girlfriends, saving the world, and recieving brain damage is what he does.

In regards to Ky-Ky, I get the feeling he was more in love with the visuals of a man in fishnet gloves and leather booty shorts, James.