My Week In Review 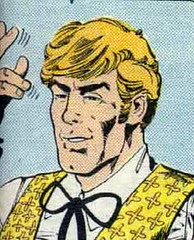 Bat Lash
Originally uploaded by Devon Sanders.
DC Comics created The Metrosexual. Heck, it says so on the cover of Jonah Hex #3. It takes a hell of a man to wear a satin vest around someone like Jonah Hex. Bat Lash is one hell of a man.

A customer told me I sound like Denzel Washington. I'll take that.

Scip now knows that I do a pretty mean Phil LeMar impersonation. I will have to kill him.

One of my customers told me Bill O'Reilly has some good ideas. I pointed out that Ra's al Ghul does too until he gets to the "killing 90-some percent of the population" part.

My customers love me. One customer brought me a cake, another brownies. I kinda felt like the Baby Jesus.

This week I learned Scip was a Navy SEAL. I don't know about that. He might be able to balance a ball on his nose, though.

I leave you with these words:

Comments:
" I don't like dudes hugging me."
Me either! Such a waste of time...

"I kinda felt like the Baby Jesus."
The resemblance is striking, actually. I think it's the glow.

"What would wildcat do?"

Come to think of it randomly hitting things would make me happy!

No way Baby Jesus got anything as awesome as cake. Frankincense? What the hell is frankincense?

The monster sleeping with the doctor?

iron lungfish -- Frankincense is the most awesome smelling old or incense you can burn. It's been used in temples and churches since Ancient Egypt, and is one of my favorite scents.

I'd rather have Frankincense myself. But that could be because my mother labors under the misconception that I like coconut.

But can you do Phil Lamar doing Jon Stewart???