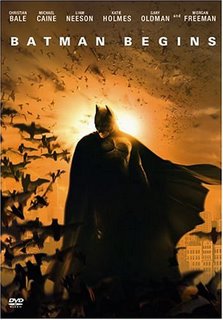 While watching Batman Begins, I noticed a scene where a young blonde boy speaks to Batman. Batman eventually gives the young boy a piece of Bat-equipment to let him know that he's a real human being...or something.

Well, later on in the movie the child is seperated from his mom and during the riot preceding the final scene, he's dosed by Scarecrow's fear gas and keeps repeating something to the effect of "I'm not afraid. I'm not afraid." Does he ever find his mom or does he become another Gotham orphan?

Were we looking at nothing there. Was it all "throw-away?" Or as Scip pointed out to me, "Jason Todd was originally a blonde boy who had to dye his hair to become Robin."

Was it anything? What do you think?

Comments:
My younger brother, who reads comics not (except for, for some reason, Rom. I'm serious), asked me after the movie if that was supposed to be Robin. And I couldn't just say "no, no it's not" because of Jason Todd.

You're not the first one to make this observation... some Jason Todd fans I follow on livejournal were freaking out after they saw the film for that very reason.

If it's Jason, though, it mixes the pre- and post-Crisis versions. Jason Todd pre-Crisis was blond, yes; but he was also a circus performer. A copycat Dick Grayson. It was the post-Crisis Todd that was the cynical street-rat -- but that version was born with black hair.

I hadn't thought of that...interesting observation.

Still, I have a hard time believing they'd make the first Robin anyone but Dick Grayson.

"Jason Todd pre-Crisis was blond, yes; but he was also a circus performer. A copycat Dick Grayson. It was the post-Crisis Todd that was the cynical street-rat -- but that version was born with black hair."

Wow! I had utterly forgotten that Jason Todd was originally pre-Crisis. I--I have been...out-dorked! (Hangs head in shame)

I think Robin's introduction was less catastrophic than Joel Schumacher's...

I am a pretty big comic geek, but only recently defected from Marvel. That being said I had this very thought in the theatre although I seriously just took it as kind of cool intentional nod to Jason Todd and left it at that. I have my doubts Nolan will bring Robin into the "new" franchise.

I seem to recall reading an interview with Christian Bale where he was dead against the introduction of Robin in a future film.

Can't remember the exact scene, but I believe it is the "I'm not afraid" scene.
Take a look at the composition of the frame...it is all black and sepia tone...

Except for the bright red of the boy's shirt.