OK, OK, it's late so...let's just get it out of the way. Look for the ongoing saga of Kyle Rayner: Adult! on Wednesdays from here on out.

Now back the thrilling adventures of our boy, Kyle...

We all do it, the telling of little white lies. I've done it. I've had it done to me. The reasons may have been to save face or to spare someone embarrassment but usually, we do it just to keep the peace. Some lies are little like, "Nah, that was Rambo on the phone." (It wasn't. Long story.)

Some lies are big, ugly, hairy, sweaty, smelly dangling ones like what Kyle Rayner: Adult! likes to tell... 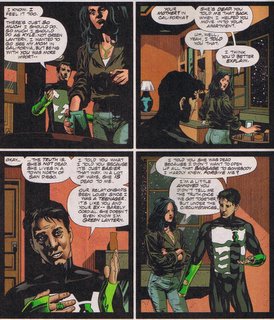 Now, I've told some sh*t in my lifetime but...
DAAAAAAAAAAAAAAMN!!!!!!!!!!!!
What I love about it all, is Kyle's justification, "It's just easier that way. In a lot of ways, she is dead to me." I've gotta remember that one. Sooooo, what does his girlfriend Donna Troy have to say about this? The being lied to, the lack of trust Kyle has in her, the disrespect? Next panel, please. 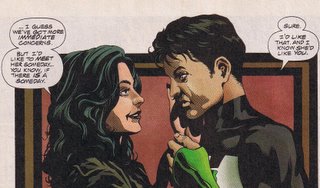 I want Donna Troy for girlfriend. What absolutely kills me about Kyle is that like Archie is a child's idea of what being a teenager is like, Kyle is an adult's idea of what it must be like to be "cool." Trust me, I know people like this guy. They're not cool. They do get their asses kicked alot, though.

Oh, and by the way, Donna, that itch between your legs. Not your fault.

Comments:
The shadows in those pages makes my eyes hurt.

I admit, that was one part of GL that didn't ring right to me. I mean, shallow, self-centered, vain and silly...yeah, he's all those things, and I like him for it.

But that sort of lie really doesn't mesh with anything else about the character. I really can't imagine what Marz was thinking...

Funny you should mention that, James. The panels are taken from "The Final Night" issues of Green Lantern.

What is Donna looking at, in that last panel? It's not Kyle: Her eyes (well, eye) are off to her right somewhere (as if she's just noticed that Kyle left his regrigerator open or something).

it so was not me on the phone... dirty liar.

I can imagine Kyle keeps his refrigerator open all the time. He probably can't stand to have the thing shut.

Hey, is that JH Williams art?

As for the lie, actually, I can see it for Kyle's character. He wasn't very honest in the beginning, and he kept trying to cover up and hide the past. He had a bad falling out with his mother, so he told Donna she was dead. Later on, after he's been a Lantern a while and is learning to deal with his problems more openly he mentions he wants to make up with her.

And Donna's really stupid when it comes to men so she doesn't question this. in fact, she's so stupid that when he's progressing past this as person, she dumps him for an even bigger juvenile -- Roy Harper. (And I totally agree with Franny about the itch)

Oh, and for the record -- I think the out of story reason was that they changed their mind in between the time Kyle said his mother was dead, and the panels in question. Ron decided he wanted to do a mother-son reconciliation story, so he just retconned the death as a lie.