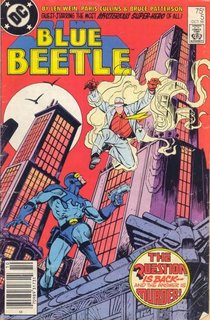 Yesterday, the patrons and staff of Big Monkey Comics somehow got onto the topic of Joe Madureira's return to comics with the upcoming release of Ultimates Vol. 3. Everyone was praising or poo-poo-ing how he revolutionized American comics by infusing them with a "cartoony" Manga/Anime sensibility.

"Awww," I said, "Paris Cullins was doing that and doing it right over twenty years ago."

Nothing but blank stares.

In the early 80's, new artists weren't necessarily known for their innovation. To be honest, you either drew like Curt Swan, Jack Kirby or someone in-between. Basically, you drew "classically" or you didn't. In the 80's, you certainly didn't draw "cartoony" and you certainly weren't chosen to launch a title if you did.

That was until Paris Cullins did so with Blue Devil. 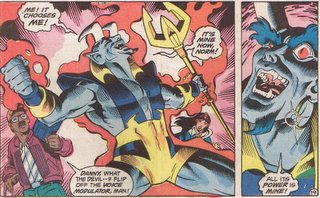 I'd never seen like it before. Cullins' art perfectly captured the chaotic, kinetic pace of a Saturday adventure morning cartoon, only on paper. His characters, also, did something that many DC Comics never did. They smiled... alot, as if they actually enjoyed being on the page. Matter of fact, Cullins' people showed wide ranges of emotion on their faces, unlike many "Manga" influenced artists who seem to think "gnashing of teeth" and grimacing somehow equates with emotion. In short, Cullins' set up our minds to "accept" the work of guys like Mike Wieringo, Humberto Ramos and dare I say, Bruce Timm. 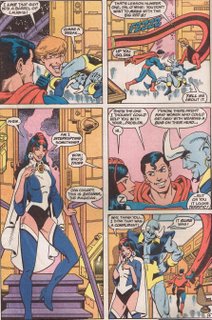 So when you're sitting down to read the rollicking adventures of "Super Grimacing Manga Influenced Man," just remember it all had to start from somewhere. For me, it started with Paris.

Comments:
Ah, the memories of Blue Devil. Good times, good times. I met Paris Cullins at one of my first conventions. I was so jazzed to find out he was a brother! He signed my Who's Who with Blue Devil. Side note: my first and only letter printed in a comic was in Blue Devil

I don't know why but I honestly always assumed he was Black and I have zero idea why.

Now, I know. Thanks, Demetrius.

Why is it so noteworthy that Paris Cullins has siblings?

I just (literally five minutes ago) finished reading Gerard Jones and Paris Cullins Rex the Wonder Dog story in Secret Origins #48. (I picked it up in the quarterbox the other day.)

Umm... nothing else to contribute, just that I was surprised to read a comic by a lesser known artist and then immediately find a fresh post about him in the comicblogdominion.

Paris Cullins is one of my favorite pencillers. I especially liked the costume redesigns he did on the old Mark Evanier "New Gods" book. Nothing against Kirby, but the threads Mr. Cullins put them in made me think, "Now THAT'S what they were meant to wear." He made Orion in particular look a whole lot cooler.

What issue of JLA (or other comic) is the scan with Zatanna from?

Great write-up; I want to check out more of Cullin's work now.

Oh, man . . . I had forgotten about Cullins' work on New Gods right after Cosmic Odyssey. He designed that female Bug, too. Good times, and good work.

I'd kill to see Paris drawing a series again. He was always my favorite artist. I'd pay to get a commission done by the man.

i was so taken with Paris Cullins growing up! he was one of the first artists i "followed" and a role model for my own work... everything you're saying about him is right!

i'm just now catching on to "the Google age", and happy to find more work from one of my favorites! i found a magazine he is working on, and was shocked to find out he is black! (i'm so late...)

anyways, thanks for writing this!