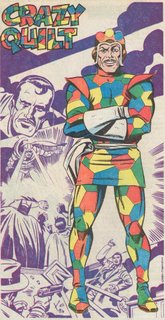 Crazy Quilt (or as he likes to be called, “David”), has done a lot in his nearly 70-year criminal career. Formerly, a noted artist, Quilt turned to crime, masterfully giving secret instructions to his henchmen through his paintings! After a rival got wind of the plot, Quilt was gunned down and though the bullet did not kill him, it left him blind. Wanting to see again, he did what gangsters did back then: he kidnapped a surgeon and forced him to operate on him. The operation was a bittersweet success, as "David" was no longer blind but could only see in fluorescent, vivid color. This was the first time he went crazy. Quilt went on to become the arch-villain to The Boy Commandos. Years later, S.TA.R. Labs was working on a cure for certain types of blindness and the man known as Crazy Quilt did what gangsters did: kidnapping another surgeon. This time, the surgery was a total success until Dick Grayson as Robin blinded him again. He, again, went crazy, this time luring a pre-Crisis Jason Todd into an alley, not realizing this Robin wasn’t Dick Grayson, he proceeded to “whup his ass.”

Following “The Crisis On Infinite Earths,” others have followed the path "David" blazed, among them, Black Mask, The Joker and most prominently, Dr. Leslie Thompkins. Over the years, we haven’t heard much from this unsung “Whupper of Robin Ass.” Now, “Seven Hells!” is proud to bring you his first and only interview.

DS: What exactly have you been doing with yourself since "The Crisis On Infinite Earths?"

CQ: First, I’d like to give a shout out to my boys, Tweedle-Dee & Tweetle-Dum, Black Spider, The Cavalier and Catwoman. I miss you, baby.

Man, what haven't I been doing would be the better question. I just recently quit my job as a writer and went to work running a successful dog care center. Learned some Latin along the way there, too. Oh! I also do alot of work with The Special Olympics.


DS: So, what goes through your mind when the bulk of the world credits The Joker as being "The First Man To Whup Jason Todd's Ass?"

CQ: *phhpht* Hell, man. [Whupping Jason's ass] was just something I just did. DC Comics didn't have to go and make no "telethon" to encourage me to beat that kid's ass. You gotta understand this was Pre-Crisis, man, we just went out and did stuff like that back then. We took initiative. That's America working right there, man.

Anyway, we're talking about The Joker here! How can I win against his press? I mean... Me? I go out there, all blind and sh*t, with my little light helmet. Not exactly headline news when The Joker's out there with a sniper rifle shooting at police, y'know. Kid, despite my first name, I'm just mean. That...that Joker motherf*****'s evil. Biiiig freakin' difference in the eyes of The Lord, man.


DS: How do you feel about Jason Todd's recent re-emergence as The Red Hood in the pages of Batman?

CQ: How do I feel? How do I feel?!? Proud, mostly. I feel like my whupping his ass, somehow, played a small part in his becoming the man he is today.

DS: OK, but how could you not know that it was Jason Todd's ass you were kicking, not Dick's?

DS: I hear ya. Recently, we saw you make a brief comeback in Villains United #2... 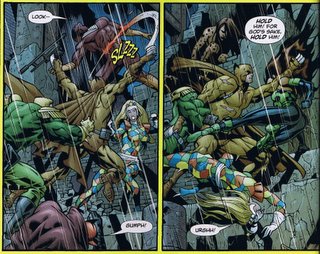 CQ: Yeah, really! I wish I could tell you what the f*** happened! I don't know who the hell that was, man. It all started out beautifully, Gail Simone called me and told me that she was a fan of my work. I wasn't quite buying it, though. Honestly, after reading the internet about how Catman got played by that Meltzer guy, who wouldn't be a little leery of DC's writers, y'know? Initially, I said, "No, thanks," but Gail, she had Catman call me and at first, I was all like, "Catman, last I saw you, you was getting your ass whupped by Ollie Queen. Youse dead to me, bitch," but then he started talking about her plans for him and how if she liked my work, she might be willing to do a little something for me in Birds of Prey. I mean, I'd always had wanted to work with (snapping fingers) Batgirl, on something but our schedules just never quite synched up, y'know. So I asked him to give me a day or two to think about it and the next thing I know, some chick's breasts are in my costume, man!


DS: Did you and Gail have some kind of falling out?

DS: Think Catman might have said something to her about the re-casting?

CQ: Again, I don't know. I don’t know how to play the politics at DC anymore. It just hurt a little bit, o.k.? I mean, I was perfectly willing to come back. I’m still mean. I really think I could have brought something great to the Villains United table. I just wasn’t even given a chance. That... that's what hurts the most.

Comments:
You know, judging from the panel, Catman and Gail were just begging Crazy Quilt to come back just so they could cut his face. He made the right call.

My theory is Crazy Quilt always WAS a woman, but never noticed it.

THAT's how crazy he is.