As If Superman Needed Your Permission... 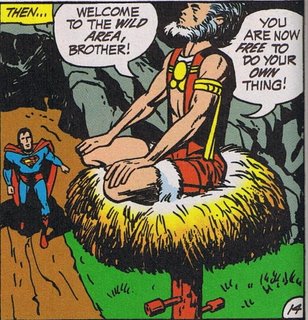 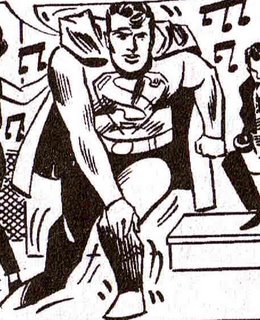 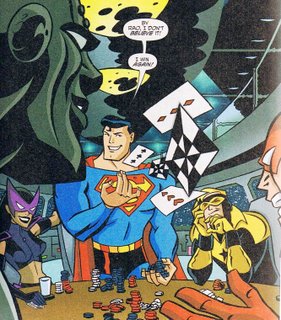 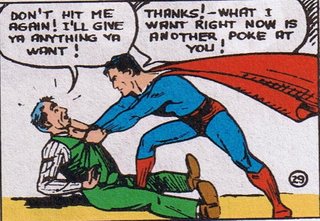 Comments:
"By Rao"? Uh...for doing his own thing Superman is kind of a square. Especially that weak ass Charleston he is dancing.

Why the hell is Superman beating up a middle-aged man in carnie suspenders? Did Clark get embarassed when he tried to win Lois that stuffed Krypto dog?

Wait a minute... that's the exact same dance Daniel Vosovick was doing in the opening credits for 'Project Runway." I knew it looked familiar!

I just want to know if the old hippie's egg ever hatched.

" Superman beating up a middle-aged man"

Oh, is THAT what he meant by "taking a poke" at the guy?

I realize it's not kosher to cast an askance eye at Shuster, but man, that's one tiny-looking Superman in that last picture.

Umm... Is it just me, or does anyone else think Booster Gold looks like he has a crush?

To me, Booster looks like the only guy angry that the guy with X-Ray vision keeps winning.

Steel, Flash, and Huntress look like they're happy just to be in the room with the big cheater.

"heiynia": What Superman suffers after doing that lame-ass Charlston.

This post, especially the tag line, just gave me a wonderful idea for an Elseworlds story:

Together they are the JPAB: The Justice Pack of America, Baby!

Bully, that makes so much sense it hurts.