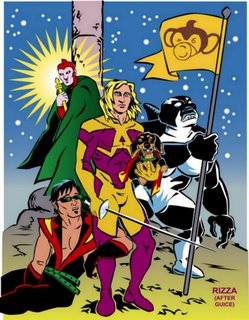 He won't make a big deal out of it so someone should. Today is The Absorbascon's first anniversary. Well, the first anniversary of The Absorbacon as you know it, for you see, I was a charter member when Scip started it as an informal e-mail collective of DC area DC Comics fans nearly four years ago. There were maybe five of us when it initially started and in our humble beginnings, we counted this guy as one of our members.

He wasn't writing comics back then but we loved him, anyway.

Over the years, The Absorbascon's membership grew to a nearly a whopping dozen. Members came and went, but the one constant you could count on was Scip's e-mails being... well... entertaining. We knew we couldn't keep the kid on the farm much longer. So, after some thought, Scip formally shut The Absorbascon down... as we knew it.

Now, one year and nearly 200, 000 Absorbascommenters later, I'd say we're all the better for it.

I can, in all honesty, say that I consider The Asbsorbascon to be some of comics' best writing... period.

The Absorbascon's existence everyday validates our love for this medium, honoring it while sometimes taking the piss out of it. In short, Scip treats our comics exactly as they should be be treated... like old friends. Because of that, we love inviting him into our own "house" everyday.

Scip had to go and find himself a bigger house in which to throw the party. To use a Scip-ism, "That is a very high quality problem," and one Scip is very deserving to have.

Scipio is the wittiest man on the web, and just a hell of a good guy. To Scip! (raises jewel-encrusted pimp cup)

Here's to the pre-eminent Comics Historian Scipio, the same man who gave us the Rungs of Villainy, Haikuizedays, explained the symbology of Hal's Head, and too many more fun and intelligent things to count!

A few weeks ago, I went back and re-read Scipio's very first post. It reads:

"Welcome to the Absorbascon, where I and small group of others will offer you our thoughts on DC Comics for your delight and derision."

Now, to the best of my knowledge, every Absorbascon post was written and posted by Scipio. But I've wondered, Devon -- were you one of the original group who was supposed to offer your thoughts?

I wish I had a jewel-encrusted pimp cup...

Gotta save me some money.

Oh, and keep on keepin' on, Scip! You're on my short list of Sites I Must Visit Every Day, right after The Daily Monkey.

Why, yes! The Absorbascon once was envisioned to become a sort of comic book collective sort of like "Comics Should Be Good."

Then, on April 11th of last year, something happened... and that is another interesting story...

It's the first blog I check each day, even if he got all existential on Supergirl's @$$.