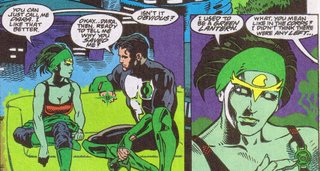 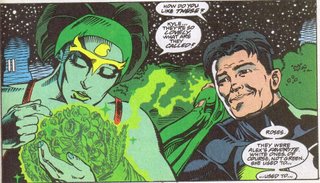 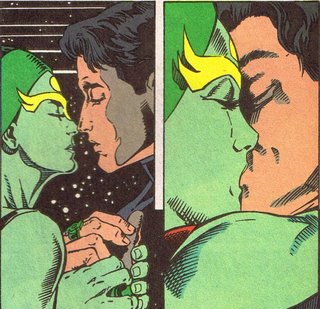 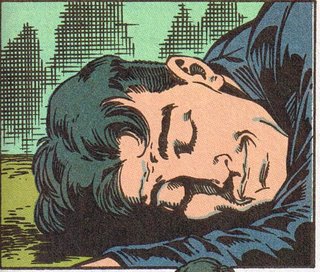 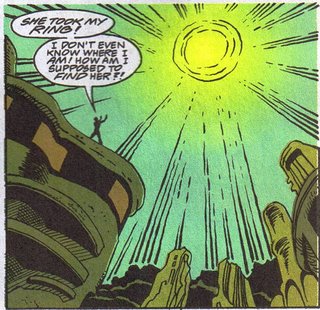 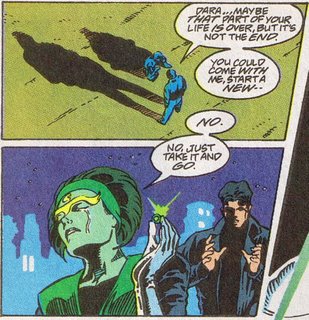 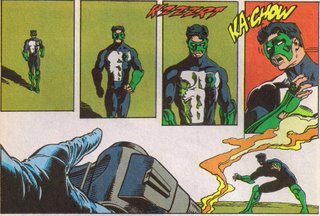 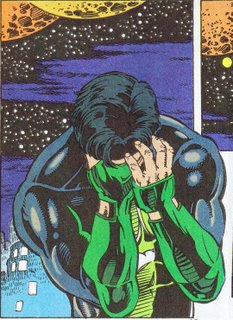 Welcome to any day in the life of Kyle Rayner: Adult.

Comments:
You know, I'd forgotten that gal killed herself. Once again, sleeping with Kyle Rayner has proven to be the kiss of death.

Sleeping with Kyle Rayner is a kiss of death? I'd take my chances.

Sleeping with Kyle Rayner is a lot like breaking a mirror under a lader surrounded by dead black cats on roller skates. They circle around you repeatedly crossing your path while cursing you with their undead gaze.

Has Kyle slept with ANYONE who didn't die?

(Donna SO counts, she died twice since they started dating)

I sure can't think of anyone who managed to survive Kyle's deadly kiss. The green woman shot herself, Jade sacrificed herself in a manner so boring that even Ragnell didn't enjoy it, Donna bit the dust twice since then (doubtless with more to come), and Alexandra DeWitt's fate is gruesome and infamous. At least we got Gail Simone out of the deal.

The conclusion? Sleeping with Kyle is probably less safe than the thing with the dead cats. Statistically, you have a 125% chance of death.

I must have been asleep at the keyboard to let you beat me to blogging that issue.

That's depressing.
At least Hal just gets bonked in the head, and hilarity ensues...

Maybe in a future issue we'll find out that Kyle inadvertantly desecrated a Holy Temple of Aphrodite or Ishtar before he got the ring. He's been suffering the wrath of the angry love Goddess ever since.

What I wanna know is how many green women has Kyle slept with? He's like a DCU Captain Kirk for crying out loud! If I were She-Hulk, I'd be a touch nervous right now. These things do tend to happen in 3's, y'know.

I would love to read both of those stories. In fact, I'd like to see both plots in the same story, where She-Hulk has to defend Kyle against the wrath of an angry love goddess in order to save her own life because she, too, had the pity sex with Boy-Toy Lantern.

Maybe she manages only to save her own life with the argument that cross-over sex doesn't count, because it's not canon.

steven -- Pity sex? Have you seen that guy's ass in spandex?

You know I have, thanks mainly to you.

I'm beginning to think it's just not safe being female and appearing in a Green Lantern comic at all.

If they'd have brought Katma back to life during ResurrectionFest 2004 I'd be more inclined to disagree with you, Mari.

Combine that with the lack of new female GLs (There were what, 2 background females in GLC? Added to 2 females with speaking parts you get a whopping 4 in 7200) and you've got some serious food for thought here.

At now, I think we must really fear for Marissa Rochelle... who, in fact, recognized the guy for the big idiot who is.