Because Of You, We're All Taking Golden Showers. 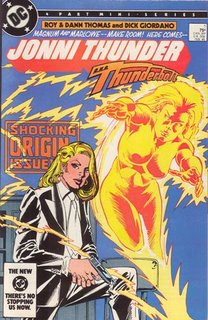 It happened like most things in my life happen: with three dollars and the best of intentions.

I went out and bought the four issues that comprised 1985's Jonni Thunder AKA Thunderbolt. I now kinda wished that I hadn't. It's just indefensibly bad. I drug the four issues around back, shot 'em. Later on, a little boy named Calvin came by and promptly urinated on them. OK, they weren't that bad. I could sit here and explain why it was pretty bad but where would I start? The robot cockroach, the abysmally written Chandler-esque dialogue, the pink t-shirt wearing male secretary she'd nicknamed "Sunshine" just so she can walk through a door saying, "Good morning, Sunshine?"

Whenever she walks through that door, I imagine Sunshine secretly mumbling under his breath, "Come a little closer so I can hug you around the neck with my hands, b****."

I choose to focus on something else: Roy Thomas' love for Golden Age DC Comics.

If it weren't for Roy Thomas, I doubt that we'd all be giving even half a damn about DC Comics as they are today.

For those who remember All-Star Squadron was essentially Roy Thomas' monthly love letter to DC's Golden Age characters and their Quality & Fawcett acquisitions. It was a very good thing and something that lead, in my opinion, to an even greater thing.

But... that is another story for another day.

Comments:
I can't remember the whole series, but I read most of it and it was dreck. But, the assistant in the pink T-shirt with the nickname Sunshine ("Good morning, Sunshine"-BWA-HA-HA) is BRILLIANT, and belongs in Manhunter.

Just one 'mo-ment with her blond assistant in a pink shirt after a night with Todd Rice.. Perfect I tell you.

The rest of it must stop there.

I haven't read Jonni Thunder, and I'm sure it's terrible, but love for Roy Thomas is always something I can get behind. Especially All-Star Squadron, which I love more than is reasonable. I can't wait to read whatever you have to say about it.

Sometimes I think the internet is taking away the magic of comics. Case in point: there was a character in the old Stormwatch series I thought was pretty cool. She was kind of a tough-talking broad, a blonde who wore white suits and could turn herself into a bolt of lightning. She had close ties to a lot of Golden and Siver Age analogue types. I'm not sure how I feel about lightning striking twice, here.

I can't imagine Warren Ellis ever read Jonni Thunder, much less decided to rip it off.

Even if he didn't read it, that doesn't mean they didn't both get the idea from a third party, like a pop star or a cult movie or something.

This is the exact comic I hold up when people try to convince me the new Blue Beetle is a good idea. Stupid times ten.

Also, I think that Sunshine thing might be a "borrowed" gag from Blackadder's Corporal Darling.