Many are excited at the possibilities inherent within DC's June release of Brave New World.

Phantom Lady is more excited than others. 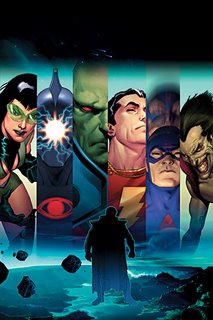 Many are focusing on certain aspects: Martian Manhunter's apparent survival post-Infinite Crisis. The return of one of DC's most enigmatic creations, The Creeper. The shock of white Captain Marvel's hair. 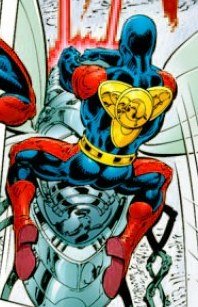 The "stupid" jet-pack thingy The All-New Atom is wearing.
All of this is well and good and it gives something to complain about but look closer at the second picture. Do you see it? Well, here it is.

The new Atom is decidedly Asain-American. 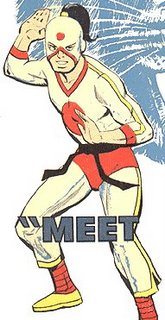 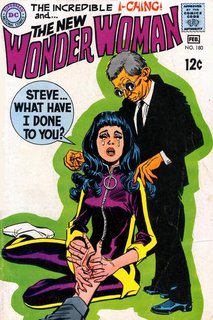 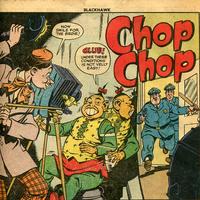 ...and he definitely isn't anyone's "comedy relief."
So, here's to trying to get it right the second time. Between this and The New Blue Beetle, we truly are being given a Brave New World to explore.

Check back tomorrow for Kyle Rayner: ADULT! and Thursday for a follow-up to Monday's post.

Meanwhile... over at Fan Fatale: Sherin loves She-Hulk. Take that as you will.

Comments:
I wonder if anyone will criticize the Atom's size and the stereotyped short height associated with asian people. I think its interesting that none of the forums,etc. I've read even noticed. Probably a good thing?

I'm still thinking that AWFUL costume will be what people pick upon more immediately. That and the whole 'why not Ray Palmer?'

Plus, Phantom Lady and Power Girl should team up!

If DC weren't so irrationally determined to keep their "worlds" apart, Phantom Lady and Power Girl would have been kicking *ss in Birds of Prey (aka Justice League Women's Auxiliary) for years now.

"Now, in World's Finest, your four favorite heroes in one story, together!"

Hey Devon, nice call on the new Atom and the, apparent, lack of stereotyping.

Oh and Daniel, "Justice League Women's Auxiliary" was inspired. Can I use that?

Hey, I'll just be happy if the All-New Atom isn't cousins with every other Asian character in existance. I'm looking at you, Claremont.

Yeah, well he looks Asian on the cover, that's for sure. But if you take a gander at the interior pages it would seem that Byrne drew him how ever the hell he wanted to. The colorist gave the character vaguely Asian skin tones, but Byrne seems to have just drawn another bland interchangeable character.

Sunfire he is not.

Or perhaps this was a late stage change? Didn't I hear about another version of this cover with a non-Asian Atom?

Good catch. But, uhm, how do you know he's an Asian-American? Couldn't he just be Asian? Like, you know, Dr. Light II?