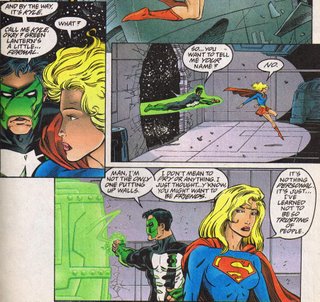 I was going to post about this scene last week. Skeezy guy that he is, after failing to pick up Supergirl, Kyle moved right on to Donna Troy.

...Of course, because she almost dated Kyle, this Supergirl died. Twice. Before being erased from history.

"I'd prefer not opening myself up to any more"

Didn't you pay attention to Winick's run? That one poor kid got beat up because he had a crush on Kyle!

This was from that particularly bad Wolfman tailspin that Titans went into towards the end, isn't it. Brrrr - it gives me shivers to remember that I kept getting it almost right up to the end - including the bits with the eeeevil Beast Boy and Raven doing a "Dark Phoenix" imitation.

And steven - has this Supergirl actually been erased from history? When did that happen? Was that at the end of the Peter David series or something?

Oh, Dan Didio has made comments to that effect, that Infinite Crisis has wiped all Supergirls but the current one (erm, two) from history.

Course, that doesn't count the army of Supergirls who showed up in Batman/Superman #24 last month, which included Linda and Cir-El.

Well, since DC can't go back and erase her from my memory or comic books, that's not exactly how I'd interpret it.

It just means that the Matrix/Linda Danvers Supergirl won't be coming back to challenge the current one for the title.

...until one good writer comes up with one good idea. It's comics, after all, things change. Hal was dead until he wasn't. Wonder Woman was a rookie until she was a founding member of the league.

Go Linda! Stick with Comet, The Super-Horse. It may be icky, but the mortality rate is much lower!!