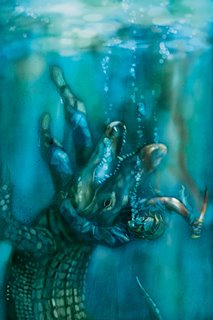 I've been reading this young lady's blog alot lately. Interesting things going on over there.

Today, I come at you as a man who runs a comic book shop. I have come to tell you that despite our collective best efforts...


WOMEN READ COMICS!!!
Not just that "big-eyed- boys-flirting-with boys-Manga" stuff that many a comic book stores thinks make the gals go crazy for the comics. No, my feminine clientele they like...y'know... comics. Comics like...

100 Bullets. Birds of Prey. Loveless. Jonah Hex. Manhunter. Street Angel. Red Sonja. Hellblazer.
You know, well-written, well-drawn comics.
"Wha...?" "HUH?!? How did this happen?" I'll tell you how this happened. They make it happen. Everyday. I help it along by saying "Hi." as they walk through my door. Regardless of whether or not, they walk through the door first or behind their "boyfriends." I find saying that puts people at ease and all that.

I find that if you stock a store with variety, women manage to find their own way to what's good. Me? I just get out of the way. I found the ladies, they don't like "girl ghettos." You know, the corners where Manga trades are kept. They weren't selling at my store so we got rid of the Manga, freeing up more money for other things like... comics.

I find that women will ask for help if they need it. When they do ask, ask them what they like to read. Don't go into "girl/comics" mode and start dragging her to the "Vertigo: Sandman and Y: The Last Man" section. They're fine books but not required reading for all "girls." Retailers, please stop creating "PINK" sections.

If they don't like the suggestion, don't act like she turned you down for the prom. Move on to the next suggestion.

You want a woman to read a comic? Do something revolutionary. Respect her. Don't put her in the box, you, not the comics publisher created for her. Look her in the eyes, speak to her and treat the lady as if she has balls. In other words, treat her as you would anyone else.

I assume that "don't plaster your store with Dawn and Lady Death and Tarot posters" goes without saying?

Funny you mentioned that. I wrote an article for CHUD about three years ago imploring retailers to take down their Lady Death posters before Free Comic Book Day.

The computer I was using at the time is long since dead and it had that column saved on it. I was trying to channel some of that energy while I was writing this post.

Additional points to you for using Jonah Hex as an example. I'm not entirely sure it isn't the best comic being produced by either Marvel or DC these days.

Man, I loves me some Hex. Good comics transcend gender.

At the comic store I go to most often, it's pretty good. The clerks are very conscientious.

Sometimes they can be a little *too* conscientious though. And admittedly, that's probably my own oversensitivity at work.

It's just, well, even though I head unerringly over to the DC new release section, as I've done so every Wednesday for the past school year, one of the male clerks will unerringly come over and say "Do you need help finding anything?"

To be fair, I tend to look quite befuddled even in my natural state, so it's a fair assessment to make. And it wouldn't bother me, except he doesn't do it for any of the guys.

I mean it's great that he's helpful, but honestly, I know where I am and what section I want to be in. If there's something in particular I want that I can't find, I'll ask, but I'm usually pretty self-sufficient in a comic shop.

I admit, I can be touchy though.

I try my best to respect the women as little as the men.

And thank god that manga section is history; you notice how well the indie stuff is doing lately?

Women read Red Sonja? I don't know why that surprises me, but it kind of does.

I know I'm in a store I'll return to if I'm not directed to the manga section as soon as I walk in (despite the fact that I'm usually wearing some sort Batman tshirt). The good stores are usually used to female customers who enjoy mainsteam comics.

Amen! I hate being marketed at! Quality vs. packaging, man. A smart person is going to like a well written story, boy, girl, goat, whathaveyou.

And for the record, I aak everyone if they need help. Everyone? EVERYONE. It's in my job description and we literally have to do it every 15 minutes. Or, well... say we do anyways.

Funny you mentioned that. I wrote an article for CHUD about three years ago imploring retailers to take down their Lady Death posters before Free Comic Book Day.
It's one of those things that can't be quantified ... but I tend to feel that it's not even an issue of feminism, but just good business sense. How many women, children, families, etc. will you drive away with that Lady Death poster? How many rabid fanboys will be driven from your store if you don't hang Lady Death posters?

Seems that comics is a precarious enough business that it's nonsensical to make your store unwelcoming to more than 50% of the population.