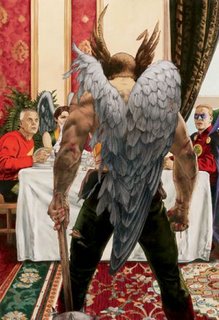 Oh, my God!!! Could you have a better time than the one I had last night? In the dead of the night, I get this call saying to show up at The Hub City Friar's Club for the "Seven Hells!" Council of Saints" Induction Ceremony. I get there and the freakin' Crazy Quilt is working the front door! The Friar's Club knows there's comedy gold in having his crazy ass work the line. The "whupping Jason Todd's ass" jokes just kept on coming.

I walk through the Friar's Club door and the party's already in full swing. All of the guys were swarming in the middle of the ballroom, apparently the new Batwoman was there, along with Renee Montoya, Maggie Sawyer and Holly, the new Catwoman. The ladies were just eating soup and paying the guys no mind but the guys just couldn't take their eyes off of them.

Power Girl walked in in a white low-cut number. Obsidian basking in his new gay, kept asking her who she was wearing. He then proceeded to squeeze her left breast like Issac Mizhari did to Scarlett Johansson. Alan Scott may be mourning two children soon if Obsidian doesn't wake from his coma. Damage and The Human Bomb upon seeing PG in her dress both simultaneously exploded. Crazy Quilt and Doctor Midnight kept asking what happened.

The ceremony began soon after Jay Garrick and Superman rebuilt the hall. Anyway, up on the podium were the night's inductees Hawkman, Lady Cop and Kyle Rayner. Wildcat couldn't be there as he'd already commited to taking Ma Hunkel out to dinner weeks before. Mr. Terrific read a nice note from Wildcat, thanking us for thinking of him.

Geoff Johns was there to induct Hawkman into The Council of Saints. Before Johns could say a word, Hawkman picks up his mace and proceeds to trash the stage! You know what he did next?!? Walked off the f*****' stage without saying... a... word! He is such a rock star!!!!

Next up was Liza Warner, Lady Cop. Renee Montoya had the honor of inducting her. She spoke about how Liza had been an inspiration to her... blah blah blah... she was speaking lesbian. Lady Cop stood up (She's smaller than I thought, I'd say on a good day she might be 5'5") and delivered a rousing lecture on VD prevention, all the while, keeping her eyes locked on Kyle Rayner. Every woman in that room gave her a standing ovation.

Next up was my boy Kyle Rayner, there were no Green Lanterns there to induct him so he had to induct himself. Kyle was a little drunk and started off by telling us the story of "Chicken Little." Just as Batman was about to pull Kyle off the stage, out of nowhere, Kyle grew some balls and shoved The Batman! Kyle walked back to the podium, got really quiet and thanked everyone for the opportunity to learn from them, to fight for something greater than himself. Superman began to clap and everyone else followed suit. Kyle just kind of smiled and walked off the stage. Power Girl went to hug him. His balls are healing nicely.

Blue Devil ended the night with a prayer and Ambush Bug brought the house down, wheeling out the stuffed corpse of Jonah Hex.

A fun night was had by all.

Comments:
I don't think I've ever been the first commenter on any of the cool comic blogs I read. I'm speechless.

Oh, wait. No I'm not. I meant to say that you'll have to rewrite that scene if DC makes Montoya the new Batwoman. (Or, you can retcon it and say the Batwoman in attendance was actually Montoya's new girlfriend in disguise, there to dispel the rumors of BW's secret identity.) You'll also have to clean brain matter off of the blogosphere, because I know of at least a half dozen DC bloggers whose heads will explode in anger.

By the way, it should be noted I'm like two weeks behind in my reading, so if they've already revealed the new Batwoman, I'm retconning this post to be the result of a bizarre time-travel accident. Time is broken!

That is without a doubt one of the greatest blog entries of all time. I salute you.

A new Catwoman? What's up w/ Selina Kyle these days?

Giving birth normally puts a damper on your crime fighting abilities. Kid's name is Helena too, which is kinda spiffy. And, oh, by the way, as of right now, we don't know who the dad is. Remember: Wiki is your friend.