Where Is The Curry Heir? (Spoilers)

FOR THOSE WHO DESPISE SPOILER-Y STUFF, FAIR WARNING:
TURN BACK NOW!!!
I've been sitting on this for two week's now but I just had to unleash this after reading 52 #6, Booster Gold upon entering the headquarters of Rip Hunter, Time Master is met with this chalkboard full of what you'd think would be the rantings of a madman. But no, it is far from that, if you doubt, read this. 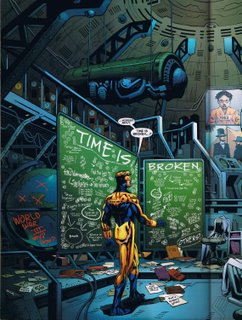 One thing in particular caught my eye: 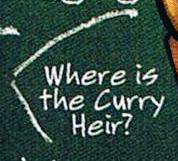 As in Arthur Curry, Jr., son of Aquaman. Heir to Atlantis. We've been looking at him all along. 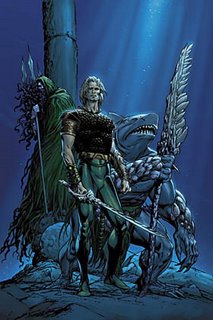 Somewhere along the lines during Superboy's breaking down the barriers between time and space, a rift opened up, creating a small window of opportunity where the infant Arthur Curry, Jr. didn't never perished at the hands of The Black Manta.
That's why this new Aquaman answers to Arthur Curry, it's his name. That's way "Squidbeard" has taken such a keen interest in him. It's his son.
That's why Aquaman's other son Koryak had to be killed. To make why for someone else.
That's why he has such a visceral reaction to redheaded mermaids, they remind him of his mother, Mera.
That why I'm suddenly so excited. Black Manta may be getting a second chance to get it right.
# posted by Devon Sanders @ 9:40 AM

Comments:
I like the fact that Rip Hunter has a copy of DC Who's Who. Must come in handy...

Your character is a beginner? PUNCH! Now he's a veteran?

Your character was a man? PUNCH! Now she's a girl. (I'm looking at you, Shining Knight.)

I actually thought that it was Arthur's OTHER son, the one last seen in PAD's Aquaman #48, who aged rapidly but looked JUST LIKE HIM. This would be... better.

Wow. I didn't think it was possible, but you just got me interested in the new Aquaman.

I'd still rather be reading the real Aquaman, but if your conclusions are correct, at least you've made Busiek's series interesting.

However, I still choose to believe that there was no good reason to kill Koryak.

This is my pet theory too, but god DAMMIT, I want a better explanation for the kid being alive than "Superboy punched some stuff." To have a mystery in one character's book hinge entirely on an event that happens to a character in someone else's book - like DC did with Jason Todd - is anticlimactic and asinine.

Devon: It took you this long to realize that? :-)

If I remember correctly, alternate-reality Arthur Jr. couldn't exist in our reality, so after being aged to look much like the beard-and-long-hair-era Aquaman, he was sent back to Mera's realm, where he took the throne.

So it COULD be him. I'd go with that before I'd go with the egregious retcon of bringing the original, dead Arthur Jr. back to life. That was one of the few genuinely interesting developments in Aquaman's history.

Just like bringing back Jason Todd had no real point or relevance to Batman, undoing AJ's death with a Superboy Sunday Punch just seems another example of retconning things that worked fine as they were.

Then again, I really like this current series and I'd hate to see it undone, just to watch the sales drop and Aquaman lose yet another book.

Why does this have to be connected to Aquaman? For all we know, Rip Hunter is trying to revolutioonize Indian cuisine and is trying to find a successor to a classic Indian dish.