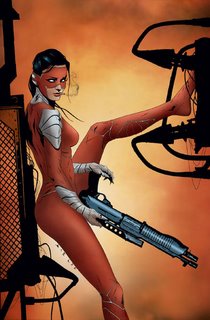 I have finally discovered the true meaning of "awesome."

About two months ago, DC Comics announced that due to low sales, they were going to cancel one of my favorite titles, Manhunter.

Due to overwhelming fan feedback, DC made the unprecedented move giving Manhunter a five-issue reprieve in order to get its' sales up and give new readers a chance to discover what the buzz is all about.

The day after said announcement, I received a new subscriber form with with one lone title checked off upon its page. That title?

For the past two months, he's come in, bought a few random other titles and his comics pull, Manhunter.

Last month, I overheard one of my employees talking up Manhunter to a customer and I watched him slip in a copy, free of charge, into the customer's bag.

What's that you ask, "Is every day Free Comic Book Day at Big Monkey Comics?"

What it is is this guy... this awesome customer guy... comes in buys his comics, read his Manhunter with us and asks us to pass it onto any customer, free of charge, to anyone else looking for something new, fresh and different.

That, my friends, is a true comics fan and one of the many I'm proud to have as customers at Big Monkey Comics.

Comments:
That guy deserves an award or something. Like an autographed first issue of Manhunter.

that is cool - you got some good folks there, Devon...

Actually, I think stores ought to give away a comic now and then on a more regular basis. I used to be an X-Men dork. Long ago, a kindly comic store manager talked DC up to me and gave me, free, a copy of Crisis. I bought the rest of the series, and slowly expanded my tatse.

That freebie was an honest attempt to show a young idiot that Chris Claremont wasn't really all that good; but it was also a sound business practice. That store sold a lot more books to me because of it.

Wow, that is a heartwarming story about a comic book shop. That's almost UNHEARD of in my fair city. Kudos to that guy, and kudos to Devon for helping to foster such an environment.

Guy in my shop seriously bought three issues of Manhunter for everybody with a pull box. I've been getting the book free of charge for two months now.

I don't think I've ever been as angry about anything as he was about Manhunter facing the ax, God bless him.