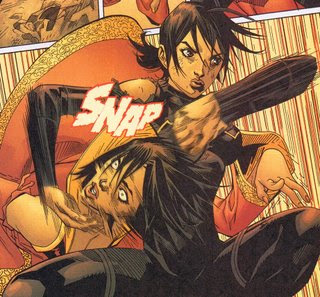 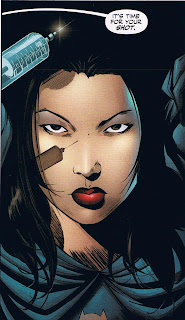 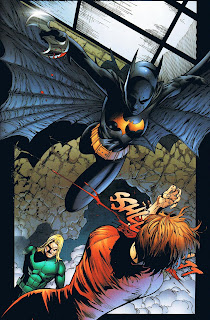 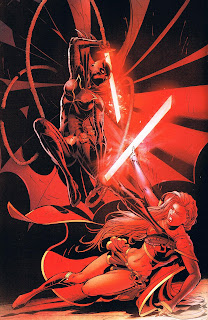 Comments:
I really don't see how what amounts to self defense and/or euthenasia, plus subsequent resuscitation, mind you, makes Cass a cold-blooded psychopath. Shiva was the only party that got physically hurt here, and she verbally asked for it with a clear head.

When a person wants to die and you kill them, bringing them back is cold-blooded. And it wasn't self-defense, Cassandra chose to break Shiva's neck with the full ability and chance to take her down with considerable less violence.

Batgirl went bat-shit insane, and should stay that way. You see her in Supergirl? That shit was vicious!

The resuscitation was a throwback to when Shiva did the exact same thing to Cass around Batgirl 25. At that time both Shiva and Cass even rationalized that dying and coming back to life doesn't negate the import of the original death. They consider it symbolic. Shiva gave Cass a second chance to use that wisdom, and she got a second chance back in return. It was ironic and symbolic and foreign from our a conventional way of thinking, but I wouldn't consider it cruel or cold-blooded.

You can have your neck broken and still survive the incident AND regain limb function. If anyone knows how the human body works, it's these gals, so I assume Cass was trying to subdue Shiva in such a way that they could both communicate but at the same time Shiva couldn't keep attacking back. Self defense.

That doesn't even matter in this story, though. If you reread the book, you'll see that Cass broke Shiva's neck to prove to her that she could beat her, but she was going to dump her in the pit directly after to negate the damage. THAT'S when Shiva reiterated that she wanted to be killed. Cass obliged by hanging her on the hook.

We don't know what killed Shiva at this point considering the ambiguous nature of the art, so I don't think it's productive to speculate that this killed her outright. Shiva did say "Thank you" while impaled, though, which doesn't scream 'Cass, I feel that this is cruel and unusual punishment!' We know from BoP, though, that something (the tearing of her flesh, decomposition, or a third party) helped Shiva into the pit after all. I think it's pretty clear that Cass's smirk as she walks away is an indication that her method of 'no killing' won out over Shiva's. That was the theme of the entire last arc, after all.

The subtext was 'Whose method is right in the end? Well, Cass's is. Duh, who else? This is her series, and she did win the symbolic fight.'

Also, Anderson Gabrych answered an interview saying that he had stories planned out past Cass meeting Shiva, and he even said what those stories were, so it's unlikely that her turning into a killing machine was part of the plan throughout his run.

I can't stop you from reading one page or panel of Batgirl 73 in isolation at face value then attach that to Robin OYL or Supergirl 14 and equate that ugly mass to proof of her being 'bat-shit insane' from Batgirl's final arc. It doesn't jibe with the message and tone of Cass's entire series or last arc, though, but I guess a lot of us are too busy eager for Batgirl II's downfall and more Asian characters turned into sexy, stock, ninja-woman, obsessive villainesses to give a damn. Long live sensationalism!

Geoff Johns had stories planned with Superboy and the Teen Titans fighting their future counterparts again, but Superboy still wound up dead. A directive came down, or he knew the book was coming back OYL, and had to change direction. And I wasn't eager for Batgirl II's downfall, it just came in a way I could believe.

Killing Shiva wasn't the cruel part. Bringing her back was. When Shiva and Batgirl had their rematch, we found out Shiva wanted Cass to kill her then and there, with no Lazarus Pit to bring her back. She was tired of fighting and having to prove she was the best and wanted to find the fighter strong enough to kill her to end it. Bringing her back puts Shiva back where she doesn't want to be, and THAT's cruel.

-he knew the book wasn't coming back, I mean.

It's only believable if you want it to be, but I hardly think that Shiva, who has killed and resuscitated Cass twice, would be terribly horrified and distraught that the tables were turned. I also seriously doubt someone like her would be unable or afraid to kill herself. She's not an invalid. If she wanted to stay dead all Cass hurt was her pride.

But Shiva never said she didn't want to be brought back from the dead. She just wanted to be killed in the first place. Again, we know from around Batgirl 25 that both Cass and Shiva acknowledged that killing Cass and bringing her back did not negate the validity of killing her off in the first place. Same applies here.

You can't really judge Cass's treatment of Shiva by thinking outside the logic of the series' characters instead of in it. Shiva's always been a special case in Cass's book, and I don't see how Cass's behavoir towards her can be expected to apply to anyone else. Is it so hard to believe that a teenage girl can have a strong sense of self and well-defined principles?

Considering Robin OYL and Supergirl 14, apparently so. Not even getting started on choice of dress, now we have a monologuing, whiny, calculating Shiva Jr. running around instead of the reticent, impulsive character who followed in the spirit of Batman before she even knew who he was and at the end of her book defied all of Shiva's principles to strike out on that same pre-Batman path again.

But I personally don't see how that's a believable transition at all.

Batman's path doesn't have IMPALEMENT as a signpost. If she was following Batman's path, she would have left Shiva unconscious and followed Batman's code by not killing. At the most, throwing Shiva into a dumpster.

And as far as how Cass reacts to Shiva, you would think finding out the Shiva was her mother would bring some kind of mercy.

We're running in circles here. First Cass is humane in giving Shiva what she wants by killing her but now she's somehow not good enough as a character because she killed her? Which is it already? Sounds to me like the girl can't make the "right" decision no matter how you toss the coin.

Like I said, Shiva's a special case with Cass. Although she knew Cass was her daughter, she chose to treat her as an equal and has never showed Cass any mercy. She brought Cass back to life when she knew Cass didn't want it the second time not out of love but because she wanted someone worthy to beat the crap out of her. She got what she wanted because she insisted vehemently. Cass killed her to end the cycle of killing or be killed and gave her a second chance to do something more with her life. Shiva was squarely beaten at her own game and could move on.

But of course that translates to Cass as crazy cold-blooded killer-at-whim? Gimme a break already. You're jumping in and out of the series' logic when it suits the editorially mandated argument that Cass is destined to be Robin's villain, which translated to Adam Beechen as 'WTF I don't get it Girl's DISTURBED.' Do we have to be so cynical about human nature?

I never said Cass killing Shiva was humane. I said bringing Shiva back after killing her was cruel. There's nothing worse for a suicidal person than being alive, period. Every action Shiva takes is to find someone better than her to end her life, so she won't have to wake up every day having to fight. Cass knew this and left her over a Lazarus pit to be resurrected into the life Shiva didn't want. It wouldn't end the violence. It just shows how merciless Cass had become.

I always thought what happened was that Shiva said she had Cassandra so there would be someone to end her run of killing, as jon has said. So Cass gives her mother what she wants. Cass kills her, but then gives Shiva a chance to start over by hanging her over the Lazarus Pit.

To me, ithe whole sequence was saying "OK mom, I did what you wanted. You're dead, your time as Lady Shiva is over. But I'm going to give you a chance to start anew. What you do with this second chance is up to you."

Shiva was beat, she wasn't the best, she didn't have to go back to being Lady Shiva, or become the Jade Canary. If she wanted to stop fighting, this was her opportunity to do so. Disappear, and pop up someplace teaching kids, or selling insurance or something.

I want this sequence of panels (and more!) turned into a movie on YouTube!