Reason Number Five To Love The Smartest Man In The World 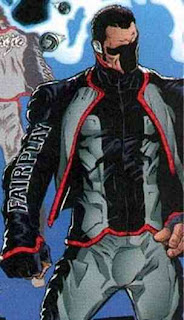 Always have. Always will.

That said, I always found it odd that I tried to be OK with the induction of Amazing Man into the pages of All-Star Squadron.

I mean, I appreciated the thought and all but his inclusion was the thing that taught me the meaning of "best intentions."

I always thought I'd been better served if I had been presented with a history where no Black man or woman could have joined a pre-civil rights movement Justice Society. It simply would have been the truth. It was an ugly truth, one that I would definitely have learned from.

Having Amazing Man in canon just seems to dimish these two characters' achievements, in some way.

heh..and y'know, in thinking about it, neither the All-Star Squadron nor the JSA have ever had any Asian members...hmm..well, maybe Judomaster if he's still considered WWII.

Tsunami was a Japanese-American who served in both the ASS and The Young All-Stars.

She was also a bit of Roy Thomas' post-WWII revisionism.

oh yeah..I had forgotten about her. Its been awhile since I've read those Young All-stars books. That was good stuff! Beautiful art by Michael Bair.

There was a Japanese villainess named Tsunami from that era as well as I recall...

It's the same character, IIRC -- her motivations initially put her in conflict with the A-SS, but then saw the error of her ways and joined up with them.

Brilliant post! I call this sort of thing Doctor Quinn, Medicine Woman Syndrome. That's where characters are inexplicably endowed with the social attitudes of people who live in the distant future. It doesn't make for especially good writing. I prefer Dan Riba's approach in the "Legends" episodes of the Justice League cartoon. There, the Green Guardsman (a thinly disguised version of Alan Scott) "compliments" John Stewart by telling him "You're a credit to your people!" John's reaction shot is priceless.

I *think* that I've seen some post-IC reference (maybe in a Blue Devil 52 Origin or in Shadowpact) to the iteration of the JLE that the Mist killed in Starman. Amazing Man II (the original's son) was in that group.

I liked AM II, and would be disappointed if he'd been Superboy-punched away, even though I share your view of those AM I issues of All-Star Squadron.

I take your point. But then, All-Star Squadron had its share of prominent revisionist characters--the Danette Reilly Firebrand, and Commander Steel (although he had been introduced earlier) in addition to Amazing-Man. So if we don't have any problems with them (I didn't, and you didn't say you did, although nobody says you had to), it's a bit much to hold his revisionist status against Amazing-Man.

Amazing-Man or not, we know the truth, don't we?

The JSA were anti-racist, as seen in the story in All-Star Comics #16, where they prevent the Nazis from exploiting American prejudices -- including, ina stunningly tasteful story considering the era, the never-named but readily-apparent racism against African-Americans.

That said, Roy Thomas's various revisions of DC and Marvel's WWII are credibility-busters, to say the least. (Roy managed to create African-American and Asian-American superheroes there as well.) The fact that Amazing-Man's power is oddly anachronistic in a Golden Age context -- he's the Faceless Hunter or Marvel's Absorbing Man avant la lettre -- certainly doesn't help matters one bit.

As far as that goes, everything about the All-Star Squadron was revisionist, from the existence of the group in the first place to its incorporating of Fawcett and Quality Comics characters and WWII-set characters who weren't actually created until the '70s or '80s.

While I see what you're saying about there being an ugly side to '40s culture (although not quite as ugly as the fabulous '50s), making the JSA characters act more racist than they were actually portrayed in Golden Age comics just to be "authentic" would be an even worse form of revisionism, because it would compromise the characters' integrity.

As for Asian-Americans, the Crimson Avenger's sidekick Wing was in the Seven Soldiers of Victory in the '40s, although tellingly he wasn't counted among the official 7. Come to think of it, the Vigilante's sidekick was Chinese-American, too. The Seven Soldiers was where it was at, man. Screw the JSA.

No where in this blog did I say that ASS or The JSA were a racist organization.

The JSA was a product of its time more than anything. Yes, racism was the thing that kept most minorities out of its ranks I really think that that these characters would not have been practicing racists.

Racism takes a lot of forethought and and alot of America just remained passive when it came to race relations.

Let's just say that th JSA fell in the latter.