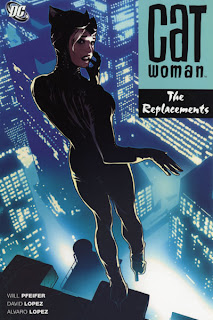 1. Whatever happened to Impulse's dog, Dox?

2. Was there ever a better designer of super-hero outfits than Dave Cockrum?

4. If Marvel doesn't want Captain America anymore, can DC have him?

5. Was it me but didn't that silhouette in Stormwatch: PHD #5 look really familiar? Someone should monitor that.

9. Did anyone else feel like Black Canary's appearance in this week's Green Arrow felt like a demotion?

10. Is the name "Citizen Steel" the greatest name in comics, or what?

13. When'd WB "The Batman" cartoon series get so good?

14. Will Hawkman ever appear in his own title again?

16. If you're anything like me, was Starman the book that made you appreciate DC Comics as an adult?

19. Why aren't you reading Catwoman?

20. Isn't it only a matter of time before someone tries to sell Will Magnus on the idea of Metal Men teeth fronts?

Comments:
To #8: That's EXACTLY what I was thinking at the end of issue 6, though this time she doesn't know how to pump gas.

It's like they had an outline for the Wonder Woman: One Year Later arc, and are hell-bent on getting it told. I doubt we're ever going to see Heinberg's conclusion to the arc, and if I was picking it up regularly (I flip through it at my LCS, is that piracy?) I'd drop it out on principle.

12: "Speaking of what he considers Azzarello’s happiest work, [Bob] Wayne announced that Azzarello’s Dr. 13 back-up stories from Tales of the Unexpected will be collected into a single volume shortly after the miniseries concludes." -NEWSARAMA

Made me happy, especially because I couldn't get myself to spend $4 an issue if I wasn't going to enjoy the main story, though I considered it every time it came out.

10: When I read the name "Citizen Steel", I immediately thought of this blog. It is indeed a very good name.

13. I was asking the same question just last night!

15. Chase and Hourman collections would be pretty sweet indeed. I never warmed up to MB, and I didn't like Aztek as much as everyone else seemed to.

16. Yes, decidedly so. More importantly, I think it made a lot of writers bigger fans as adults, too, since there's a lot more stuff coming out of the toybox than ever before, and pre-Starman, the last time you saw that on any semi-regular basis was the 70s.

Why is Holly Robinson's hair blonde on the covers of Catwoman but red inside the issues?

10. That's the name of my primary character in City of Heroes for the last 2 years.

DC Legal just might have some work on their hands, then.

Devon: I know. Thirty minutes after I write that message I remembered that NCSoft as a strict policy regarding copyright violations. I've sent an email to their Intellectual Property handler to see what the consequences would be for me. I'd hate to lose one of my favorite characters over this.

On the other hand, it is nice to know that I came up with an idea that is cool enough for DC to want to use in a monthly comic.

devon - I've done apost on starman being the great american comic book from the decade of the 90's. I totally agree with you.

1. I never really thought about it. Oh my God! What happened to Dox?!

2. No and there never will be.

3. Yes, especially since my mother died when I was 17. I really felt for Kyle.

4. Yes. Yes they should, if nothing else to have Cap retconned into the All-Star Squadron.

5. Don't read the book but I will send my feelers out.

8. Yeah, but why finish one story when you can start another?

9. Didn't read it, but somehow I agree with you.

12. Probably not. People seemed to like it. You know how DC is.

15. They should just freaking collect them period.

16. Yes, actually it did. I was 26 when I read the series and fell completely in love with it. Definitely in the upper part of my Top 5 Reading Experiences.

17. Because it was much more violent I think. Plus it wasn't an origin story and was, at the time, fresh and edgy. I prefer YEAR ONE for the artwork and thought the writing was much stronger.

19. Can't afford to. Loved the first three issues of ONE YEAR LATER though.

I have never understood that. Year One is interesting, fast-paced, pretty, and normal. DKR, on the other hand, is insane, ugly, and scatterbrained. I've always preferred Year One, and I frankly don't understand any of why DKR is so popular.

16. Starman is what I read when I need a reminder of why I love comics.

4. I dunno: I kind of like that Cap was basically a DC hero in a world of Marvel heroes.

7. Maybe preparing for war with her fellow Amazons?

13. I'd say the Robin episode. Animated series sure seem to do a good job with Dick Grayson's origin, eh? 8)

14. Maybe. Sales on Hawkgirl aren't great right now, so perhaps he'll be added as a co-star.

15. YES! Actually, a while ago I thought it'd be kind of cool if DC started up an ongoing Cancelled Comics Cavalcade, where they could continue series whose sales were too low to publish on their own (Manhunter would be a good fit)

16. That happened to me before I read Starman, but reading it definitely reinforced and strengthened it.

17. I do like DKR a little better, but they're both really, really good.

19. Not sure how I feel about Selina having a kid, although I've heard good things about the title. Maybe when I get caught up with Brubaker's run, I'll give it a look.

#17 - The origin of Batman has been told many times. The end of Batman? Not so often. There's something satisfying about finally ending a never-ending story, and doing it with an excess of gusto.

Year One was a much better story, though. More focused, cooler. Plus, loves me some Mazzuchelli.

-michael bailey
Did you duck after asking "What's a Nubia?" because of that GI Joe/Street Fighter commercial where Duke asks "What's a Dhalism?"

-harvey jerkwater
Batman didn't end in Dark Knight Returns. He returned. And continued afterwards. Haven't read all of Year One yet, so I can't really compare that two, but DKR was a little much, not taking anything away from it's innovative take on Batman.

Geo-Force is barely Outsiders material, anymore. Meltzer needs to realize that comics have a continuity that he can't just whitewash with a whim. Geo-Force is Z-list, no one would recognize Vixen from the Detroit Justice League(it's why Vibe's death is sublimely tragic) and not every hero knows every other hero's identity. Hawkgirl shouldn't be calling Superman Clark.

No, I ducked because I was making a reference to CHASING AMY where Banky asked, "What's a nubian?"

I was expecting someone to tell me to shut the f!@# up.

Starman was what got me reading comics seriously. Not Sandman, not even Miller or Moore's stuff. I don't think I would be reading comics today if not for James Robinson and Tony Harris.