The Many Deaths of Supergirl 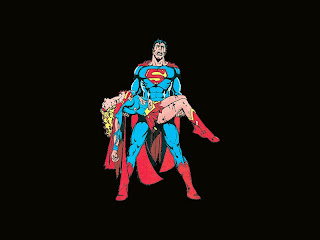 At the age of 8, I was charged with bringing Supergirl back to life.

It only made sense since I was the one who'd made the decision to kill her in the first place. At the time, no one seemed to care much and I was pretty much given free reign over the character's fate. I threw a little Mxyzptlk in there for fun and at one point, even had Mxy turn Supergirl into a mannequin. Oh, how I laughed and laughed. I could do anything and DC editorial was powerless to stop me.

After a while, I found I'd taken Supergirl as far as I could and I made the fateful decision to kill her. She was not given a heroic death. Her death was one caused by overconfidence in her own fledgling abilities. A death by Kryptonite, if I recall correctly. There was no funeral for Supergirl. She just died. I liked it that way.

I was OK with the fact that I was the boy who killed Supergirl.

At the age of eight, I also knew that if I waited long enough, someone else would pick up her story and figure out a way to bring her back but in the meantime...

Somewhere, along the line, like the next day, I, heroically and with little fanfare, brought her back to life. She got the heroic ending I thought she deserved.

A few years later, DC went and killed her again in the pages of Crisis On Infinite Earths #7. No one asked me how I felt about the character's death after I'd went through all the trouble years before to bring her back to life. Again, I was OK with her death. Again, I knew that all one had to do was wait long enough and someone else would bring her back to life.

A few years later, someone did. Like four times, already.

What I'm trying to say is that I've learned certain truths about comic book characters. They will endure longer than any of us. As long as there's a new story to tell and new storytellers to tell them, they will live. They will die. They will live, die and outlive us all, re-starting at almost the same place in which we left them.

Just as surely as any James Bond or Pinocchio.

We are as powerless to these characters' short term fates as they are.

I am OK with that.

That's what characters do.

At the age of eight, I learned more about superhero comics in a "Choose Your Own Adventure" book than I could from the internet.

Thank God, there was no internet back then.

Comments:
I remember that book. The ending where Supergirl gets eaten by the aliens sort of freaked me out when I was a kid.

Looking back, I'm really surprised there was never any sort of organized protest against Choose Your Own Adventure. For books ostensibly aimed at 8-10 year olds, there were a lot of incredibly gruesome ways for your character to die.

"We are as powerless to these characters' short term fates as they are."

There is something in that statement goes beyond mere comics and into the world at large. Great reflection man.

Turning a post about a Supergirl "choose your own adventure" into a postmodern meditation that touched my mind and heart?

You, sir, are the essence of brilliance.

I'd blush if I could.

Of course, if the answer is to just shut up and wait, the question's going to be "How long?"

Of course Supergirl's going to be brought back eventually, just like another big name character. But lower down the totem pole, the worse your chances get. Would characters like Hal Jordan, Jericho, or Ice have been brought back if no one complained, and get fans who became writers and ended up writing them back in?

That's what fan fic is for.