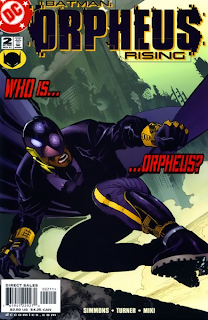 Does this character who died due to Spoiler's over eagerness to get back in Batman's good graces deserve a glass case in the Batcave any less than Stephanie Brown?

Was he any less of a plotpoint than Spoiler?

Should I write an angry letter demanding what I want?

Comments:
This reminds me of when Blackfire was depowered.

Big Mike is with you, Devon. A very small group of fanpersons get what they want from comics... and that group is the writers and editors of DC and Marvel. Everybody else has to consume it.

It does beg the question, however, of whether or not the publishers have asked for fanperson entitlement. In the old days, the leader of the Legion was chosen based upon fan letters. Jason Todd's fate was decided in no small measure by fan voting. Aquaman's hair stays shiny and new thanks to Scipio.

I guess my point is that I too find it very annoying when fanpersons bitch and moan about what they would want out of comics, especially when people take pot shots at books I really like (i.e. Supergirl... Kara had me at hello). But on the flipside, it's always been an interactive medium. Some comics still have fan letters at the end of each issue. Creators field annoying 'was that red kryptonite or black kryptonite' questions at conventions. And we're all guilty of it in some way (granted, some of us are worse than others!).

In conclusion, I submit that I agree and disagree with you in some measure, but I am completely certain that somewhere there's a teenager who started reading Batman during War Games and will one day become the writer of Batman or Detective Comics and somewhere in some panel, we'll catch a glimpse of Orpheus in a glass case. Because that's just how comics rolls.

That was beautiful, Mike.

I REALLY liked Orpheus. He got used, and knew he was in over his head.

Given his name, I should have seen what was coming, but I was very saddened when he died.

YES, he deserves a display!

I'd at least heard of Spoiler.

...and now you know about Orpheous.

First, it's way past time Batman had a whole section in the cave to commemorate those who have died in the Battle Against Eeeevil. There's a heavy body count by now. Jason Todd, Stephanie Brown, Orpheus, Jean-Paul Valley, the three bazillion Gotham cops killed over the last decades, any Batman with a sense of humor, etc. (To recognize the revolving door of death that is the DCU, the displays should be easily removable.)

Second, if the editors and/or writers are feeling their oats, then within a year or two there will come a storyline about the Children of Orpheus. For you see, Orpheus...had secrets. He...knew things. And now his friends and followers know these secrets too. The Mystery Cult of Orpheus will become a major player in Gotham!

Yes, I am a nerd, thanks for asking!

I'd always kind of wondered what had happened to him; I never read that crossover.

I didn't read too many issues with Orpheus, but I liked what I saw. Give the man a display case!

This makes me wonder: should Batgirl have gotten her own display case after she was crippled by the Joker?

Stephanie is alive and well and living in Leslie Thompson's basement.

Y'know, mutt, that would be the ideal positive-sum solution. I hope one of the writers takes you up on it.

If not, I can just say that it's what happened in my own personal Hypertime.

Having just wikipedia'ed Orpheus, he sounds cool! Sure, why the hell not? There's nothing to be gained in playing "my oppression is worse than yours." Bring on the glass cases!

I dunno, I think the obvious argument behind this one is that the case that fans are arguing to put up for Stephanie would have a ROBIN SUIT in it. If she were never Robin it wouldn't be an issue.

Although I would like to see Orpheus in a Robin suit. Dick Grayson's, specifically.

When did Orpheus become a Robin? :o

Well, he certainly deserves to be remembered, but I'm not sure remembering him in the context of Batman really does him any favours. He was an independent operative for a completely different organization.

(Since the current editorial directive seems to be: "Gotham needs more whitey!" I don't really see it happening, but that's not really connected to your question.)

How can Orpheus be remembered in any context other than Batman? He only appeared in Batman comics.

I think Orpheus should have a place, seeing as he died while working for Batman. No offense to Stephanie, but disgruntled fired sidekicks rarely get Employee of the Month. Just sayin'.

Jon's right, Orpheus died while acting as an agent of the Bat trying to stop the horrific mess that Stephanie selfishly brought about in a juvenile attempt to prove herself.

War Games was demeaning to both Steph and Orpheus. Until that point Orpheus's short-lived modus operandi wasn't "working for Batman," just like Steph's wasn't "trying to prove herself" to him (she became Robin only after Bill Willingham got the memo from editorial that she was to be killed off). Arguing which character deserves Batman's respect more seems kind of silly when they both got shat on in order to make him (and Robin) shine brighter OYL.

This isn't about fan entitlement.

What I'm trying to get across is that
in the end is that none of it really matters.

Orpheus was just a big of plotpoint to the "War Games" mythos as Spoiler.

Neither person, in my opinion, deserves a glass case in the Batcave because in the end, both characters will be nothing but half page footnotes on someone's Batman Appreciation page.

Robin costume or not.

I want and demand a glass case to fat Alfred.

They will only become footnotes because their chances at becoming better characters were torpedoed with their deaths, and so, too, was the chance for creating stand alone characters for like-minded fans to empathise with.

Look at Birds of Prey. The second the Birds left Gotham City and Batman's orbit, they gained real legitimacy. A lot of women read BoP and no other comic book. Are women a majority of comics readers? No. BoP doesn't sell gangbusters because not everyone can identify with it. Does that mean we should send Babs back to Gotham to yearn for Batman's approval then kill her off in a lame crossover under the assumption that BoP is leeching fans and sales away from Batman's main title?

Orpheus's Batman crossover read like a springboard for his own stand alone existence, and Steph was not primarily a Batman supporting character (her main appearances were in Robin and Batgirl, where she played key roles). Saying that the deaths of these sorts of characters doesn't matter seems to me like a self-fulfilling prophecy to me. Especially when their growing independence from Batman was intentionally reined in to make them seem like D-listers by comparison.

I hear you and get it. Geoff Johns said himself he never would have thought Mr. Terrific would become a breakout character.

He shouldn't be because one of the first things he did was elect him chairman of The JSA.

Now, if he'd have killed him within a few issues of his first JSA appearences then yeah, he'd have become a footnote.

Thankfully, Johns has foresight and realizes that practically every part of the pig has a use.

Where is VIBE's case? I'm entitled!

Scipio, Vibe sucked, and the world was better off with him dead.

Get it through your head.

I didn't know whether to reply at my Live Journal page or here because I am not certain how anonymous posts work, but since it was on topic I figured here was my best shot.

The first thing I would like say is that I apologize for not making my comments here. I don't want to come off at one of those people who snipe from the relative safety of their own private blog, but I tend to make most of my posts public because, well I'm too damn lazy to turn that feature on. I briefly thought about making a post at my blog (The Fortress of Baileytude) but decided out of sheer laziness (I was really freaking tired at the time) that climbing back on to the Internet was too much trouble and opening my Live Journal client was the path of least resistance.

So don't think I was trying to attack what you had to say from afar. I was careful to mention that I had thought your intent was to highlight how silly things can get among comic book fans.

Having said all of that I would like to point out that my post notwithstanding (and I really made it because the thought occured to me and I thought it would be worth a lark) I have to agree with you about fan entitlement. While I mostly sympathize and sometimes even agree with arguments made there is a sense of "But you need to do it MY way because...well, just because. I buy the book. Bow to my whims. This comic needs to be like it was when I was thirteen sitting in my room hating the world, my parents, other kids at school and reading C-Men while plotting my next great VAMPIRE campaign."

Again, I can symapthize, but I can also see editors, writers, artists and other behind the scene folk wondering why the hell they bother when some bullyhead at a convention (or even worse on the Internet) comes up and tells them they suck.

It's annoying and speaking as a Superman fan I am well versed with people wanting it their way (i.e. like it was in the Silver and Bronze Age). It makes me laugh and sad that people are still pissed at the John Byrne revamp.

So I agree with you. I was just feeling lively last night.

And thanks for posting at my LJ. Frankly I'm wondering how you found me but I am glad you did and I'm glad I found this blog. The Black Lightning thing was great and I now have more reason to want to continue my own.